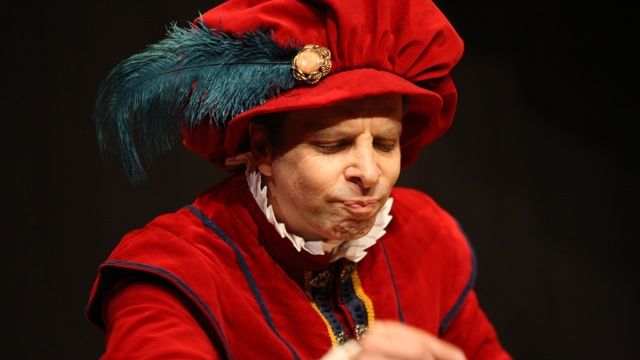 What does an actor playing a minor character, a mere ‘spear carrier’, in Hamlet think about during each long and tedious performance? This is the concern of The Spear Carrier, a very clever and funny 75 minute monologue created and performed by Jamie Oxenbould. His Hamlet features stars from TV soaps, who drone on and on downstage, out of sight to his audience. We experience the inner thoughts of Nathan, the upstage spear carrier. He believes he is worthy of much more in this production, which is mostly populated by dolts and under-developed youths. Nathan dreams of playing all the roles in Hamlet and he knows all the lines. More than that, he dreams of romance with the leading lady, a mere teen cast in one of Shakespeare’s classic roles. So there is much to consider while Nathan lolls about up stage, biding his time and awaiting opportunity to display his dramatic prowess. And this particular night, that casting director he invited and never expected to turn up is in the audience. Well, it sure looks like him. It’s hard to tell through the glare of the stage lights. Nathan’s anxieties, anger, fear and devotion to his craft are palpable. We care for him, we get bored with him and we fall in love with him. And when his opportunity comes, we are joyful for him.

The conceit of this play is clever, outrageously funny and always endearing. Jamie Oxenbould as Nathan can be annoying, cloying, pathetic, romantic and deceitful. Long monologues are very difficult to deliver effectively. This play is well paced and the movement is well planned. So that when it might start to lag, it switches into a different mode, or delights us with something unexpected. It is never dull.

A simple set, costume, lighting and music grace this production. There is nothing on the stage unnecessary or pretentious (as is so often the case these days!). This show provides a very enjoyable night out.