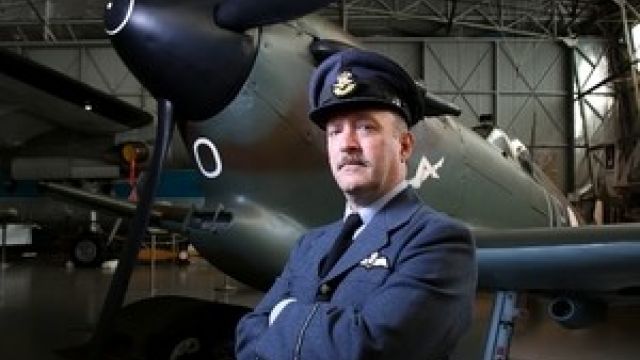 2020 marks the 80th Anniversary of The Battle of Britain. In May of that year German forces swept through France culminating in the French surrender in June. Hitler now had a full- scale invasion of Britain in his sights.

Spitfire Solo, written and performed by Nicholas Collett, tells the story of Peter Walker, who fought out the battle for Britain over the English Channel alongside many other brave Royal Air Force pilots. The Supermarine Spitfire planes with the Rolls Royce Merlin engine and elliptical wings were at the time the most agile fighter planes in the sky. The brave, young lads who flew them loved them with a passion usually reserved for young women.

Now in his eighties, Peter is resident at Silver Birches Retirement Home. Here he finds the routine to be not dissimilar to “being in the RAF” but the place is “too hot, too full of people and smells of piss”. Days become a blur of eating, sleeping and being grateful when two biscuits instead of one arrive with your cup of tea.

Collette astutely navigates the audience through Peter’s life story. He transitions seamlessly from young boy experiencing the “living kaleidoscope” of fields and villages from his first flight, to an old man who is not feeling quite so confident as a passenger on a long-haul flight to Australia. The piece steps back and forth in time from The Battle of Britain, to the battle to renew his relationship with his estranged daughter.

Far from being confusing the reminiscences are cleverly played out. An armchair provides a Spitfire cockpit, a walking stick the plane’s joystick. An array of condiment bottles, including the English favourite HP Sauce, become assets lost or protected in war.  An uncomfortable-looking upright chair appropriately becomes an economy seat on a long-haul flight.

Changes in time and place are well designated by Stephen Dean’s lighting design. The piece opens and is interspersed with newsreel footage from the 1940s projected on to a curtain on the back wall of the small Bakehouse Theatre stage. It’s a shame that the projection wasn’t on to a flat surface. The folds of the curtain do give the footage a dream like quality, which perhaps was the intention.

Collette, directed by Gavin Robertson, plays all of the characters, young and old, male and female and does so with delightful physicality, pathos and pluck. His array of impressions and accents are many and varied, from schoolchild to Winston Churchill, northerner to public school British. His Aussie is pretty good for a Brit too!

Spitfire Solo is a lovely piece of theatre, cleverly written and played with a heartfelt and moving performance by talented and highly skilled Collette. It’s an hour in the theatre that will stay with you long after the show is over. Be quick to get yourself a ticket.