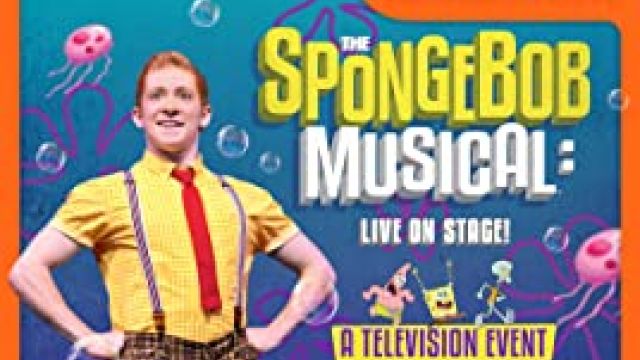 This sensory and psychedelic overload of Nickelodeon’s monster hit animated cartoon series is a playful and imaginative romp through the underwater world of Bikini Bottom.

Designer David Zinn, who created the sets and costumes, splashes the stage with color to create the most fabulous watery three dimensional and theatrical wonderland, with pink plastic umbrella jelly-fish and dozens of lime green pool noodles that approximate sea kelp, amongst other ingenious inventions.

Ethan Slater as the yellow rectangular kitchen sponge has the role of a life-time, and delivers an irresistible performance. Dressed in a yellow shirt, plaid trousers with braces, and a red tie, he brings the eternally optimistic character gloriously to life.

Bikini Bottom is facing its darkest day in history. The underwater volcano, Mount Humongous, is threatening to blow sky high and with it obliterate the town. Spongebob and his trusty sidekick and bestie, starfish Patrick (Danny Skinner being brilliantly goofy), along with Sandy (Lillie Cooper), a Texan squirrel (with pipes to die for), set out to stop it with science. Only problem is the villainous Sheldon Plankton (Wesley Taylor) (an enjoyable malevolent presence) is not about to let that happen.

Casting doom and gloom on the trio’s efforts is the bossy, blue-haired, Squidward Tentacles (Gavin Lee), whose breakout number “I’m Not a Loser” is the hit of the show. His four-legged pants costume with top hat makes for a zippy tap-routine accompanied by a sexually-ambiguous chorus-line in red-leotards and feathered hats. It’s choreographer Christopher Galletti at his finest.

Other tunes to register are “Hero, Is My Middle Name” by Cyndi Lauper and Rob Hyman, sung by the trio of principals, and “BFF” by the Plain White T’s, a buddy number for SpongeBob and Patrick.

There are sly references to Government inaction (Gaelen Gilliland’s shellfish Mayor brings chuckles), panic-rousing media (Kevin Moon Loh is wonderful as a glam-rock newscaster), and a minor reference to climate change, but it’s Slater’s show. He radiates sunshine and goodwill in bucket-loads. It’s a brilliant performance and the audience loves him.