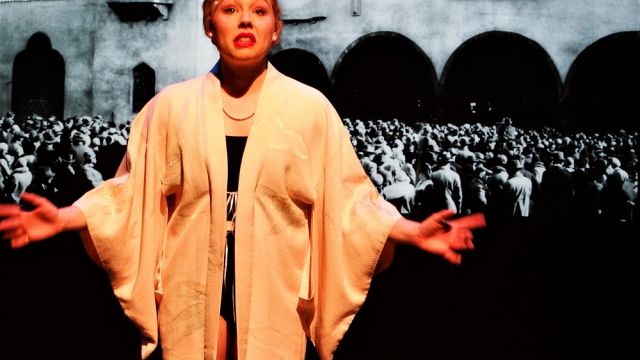 I was lucky enough to catch the St Kilda Stories, presented at The National Theatre, and this bodes very well for the company’s next two offerings.

St Kilda Stories is a series of five monologues, all by different writers and performers, and a finale that brings all the actors together.   There is a satisfying variety in the material, each of which is directed with finesse by Elizabeth Walley who works very differently with each story to bring out the essence of the writing and show performers at their best.

Twisted World, written by Mazz Ryan and performed by Alec Gilbert, is an extremely intimate and somewhat uncomfortable monologue of a gay man talking to the biological mother of his children.  The writing rings of truth, as does the performance, and as such borders on the – too much information - embarrassing.  It feels very real. Louise Baxter, as the writer of Bathing Beauty, has managed to hone her work to become the perfect vehicle for performer Isabella Gilbert, who works physically and vocally with smooth and perfect timing to present a charming young spectre from the Sea Baths on the St Kilda foreshore.  This is the funny/sad story of a synchronized swimmer who couldn’t swim.

Charlotte Fox is sublime as the beautiful young army office in Waiting for Kouglhoupf.  This work, set around the time of WWII, is grounded in the nuance of the time.  Ms. Fox subtly and wholly convincingly tells us the story of her character’s burgeoning romance that revolves around the famous Monarch Cake Shop in Acland Street.  Writer Bruce Shearer has penned a delightful, simple, very true to the era story.

Seagulls Dream of Red-hot Chips on Oceans of Dreamy Ice Cream is an interesting monologue also written by Bruce Shearer and performed by Kyle Roberts.  Writing and performance contrasts greatly from his previously presented work.  Roberts almost morphs into one of the very loud and strident seagulls he is describing with a kind of reverence.

Clare Mendes’s work Big Dipper refers to the ride no longer at Luna Park.  Performed by Clare Larman it chronicles some of the fun, youthful times of its protagonist’s history in relation to the history of ‘vanished’ St Kilda.  And who would have thought there were so many fires in a single suburb.  This work reveres landmarks both present and missing.

The torch song finale sung by Alec Gilbert with dancing support from the rest of the cast is a lovely way to tie the whole evening up.