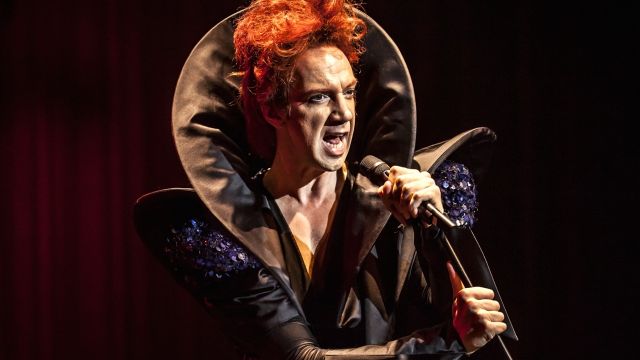 German-Dutch cabaret performer Sven Ratzke has created a unique individualised persona in his tribute to David Bowie. Starman is Ratzke’s homage to the late star and it is filled with his interpretation of familiar Bowie songs. Long-time collaborator Charly Zastrau is along for the ride on piano and offers up extraordinary arrangements.

Ratzke is glam rock at its finest. Flamboyantly dressed and demanding the attention of his audience, his statuesque frame sashays onto the stage with confidence. It is clear we are in for a wild ride. His eccentric prelude to songs is quirky as he moves through the audience, engaging his victims with wild banter. Within minutes it is clear any preconceived ideas I had about the show were ill fitting.

Helping us to revisit a time of excess, Ratzke’s narrative is singular in its delivery. In what could best be described as a bizarre rant about mixing with celebrity, black holes and our place amongst the universe, it is never clear whether he is reliving past experiences or he just has a peculiar imagination, but perhaps that is the point.

Always the showman, Ratzke is sure of his talent and the limitations of his voice. Iconic tune "Space Oddity" was given a theatrical infusion, but the highlight was his rendition of Heroes; deeply moving, it was at this point he held the audience in the palm of his hand.

Many Bowie songs were missing, such as "Changes" and "Fame", but most in the audience seemed satisfied with their trip down memory lane. If I had one gripe, it would be that some tracks seemed in desperate need of electric guitar. Many songs were given a ballad touch and fell short of lifting the roof of the theatre.

Entertaining, even crazy at times, Starman is all about its leading man.