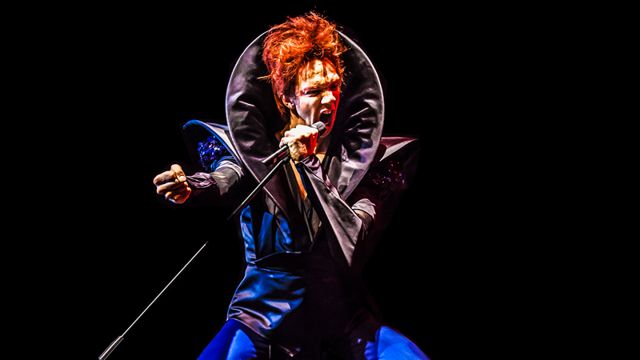 There is a Starman in the sky that can blow our mind!

Starman is a masterful blend of rock and cabaret, celebrating the life and times of David Bowie, performed by the dazzling and hypnotic Sven Ratzke.

Ratzke struts out, voguish and charismatic, dressed in a frilly black lizard costume. His repertoire begins with a story about a billion stars and a billion people followed by a beautiful rendition of “Moon Age Daydream” sung like it was his own.

Ratzke, an acclaimed International Cabaret performer, has ploughed through the vintage Bowie oeuvre and provides us with a meandering surreal story that is an honest tribute to the glam-rock legend. From foggy London, to the Chelsea Hotel in New York City, leading him into the cold and sinister Berlin, he charts the Ziggy Stardust journey with a passionate zeal that parodies his life in ground control and taking protein pills, sitting in a tin can far above the world.

His cover of “Rebel Rebel” has the crowd screaming and groovin’. His three-piece band snare his every move as he jolts and swerves with rock star ease.

The show ends with a zealous encore paying homage with his own song to the man that inspired the show. But it was “Heroes and Fame” that gave Ratzke a sentimental edge along with his rendition of “Space Oddity”, sung with a passionate and sorrowful resonance that exuded a nostalgic reminiscence of cabarets of yesteryear.

It would have been great to see Ratzke flaunt more costume changes along with a more spectacular light show as it lacked lustre and would have only further enhanced the overall performance. The acoustics were average but the band had diverse instrumental beats and range that complemented the musical arrangements of Bowie’s music.

It would be amazing to see Star Man waiting in the sky to come back to Melbourne to meet us again because he knows and we know it is all worthwhile.