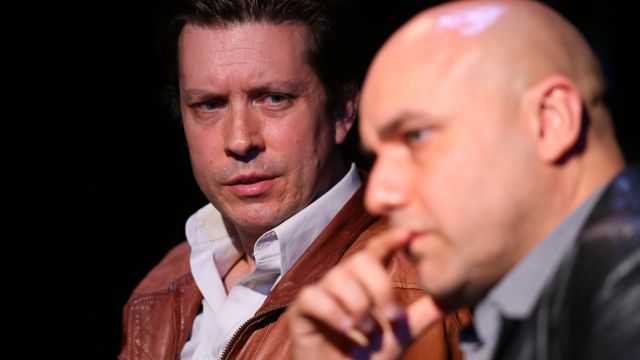 Keith Huff became my hero when I knew he wrote Mad Men and the brilliant House of Cards.  His expertise at storytelling and snappy dialogue is also on show at Sydney’s Old Fitz with A Steady Rain, a two hander about a couple of longtime partners patrolling the hardened streets of Chicago.

Huff wrote it in 2007 and then Hugh Jackman and Daniel Craig played the roles on Broadway.  Here, Justin Stewart-Cotta plays Denny, an explosively emotional cop obsessed with protecting his family, while Nick Barkla is Joey, a more thoughtful, heavy-drinking loner who’s cherished by Denny and his family.   We mostly see them sitting side by side as in the patrol car, bickering, challenging but always looking out for each other.

A fallout with the station escalates into a brutal criminal entanglement which Hoff unwinds with clear and bloody detail, and which eventually smashes into Denny’s home and, as the stakes grow, polarises our buddies.

Adam Cook’s fine production makes imaginative use of this intimate space beyond the two central chairs.  Sharp lighting and nicely varied sound takes us into the streets, offices and crime scenes - and unrelenting rain - of this underbelly Chicago.

Both actors are perfectly accented and emotionally pitched and their arc of suspenseful storytelling, to us or each other, almost rivets our attention for the full 110 mins.  An unfolding cop buddy story is hardly an American original, especially one where masculine identity is forged to the family - itself another US obsession.  You can see it every night on telly but Cook and his actors make it worth braving the rain for the theatre.