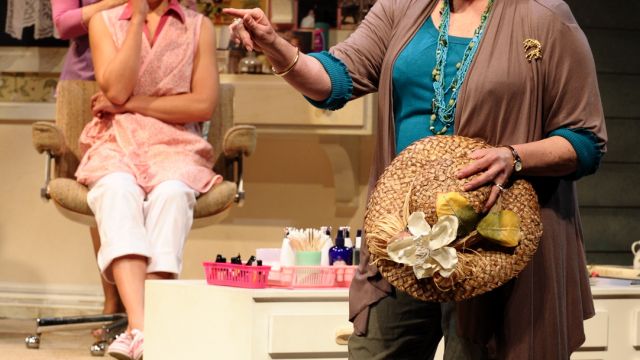 Darren Yap’s touring production of Robert Harling’s play, set in a beauty parlor in America’s Deep South, proved it’s in good shape on its recent Brisbane dates. With an A list cast, it was a pleasant two-hours in the company of this group of gossipy Southern belles. Jacki Weaver played the hairdresser Truvy, broadly, but with a sure comic touch, Geraldine Turner’s dog-loving Ouiser was appropriately garrulous, and Jennifer Hagan’s posh Clairee, whilst sounding as though she would have been more at home in an English country manor than the Deep South, landed her share of laughs. Debra Lawrance as the mother M’Lynn, who had to face up to the death of her daughter Shelby, brought some much needed and effective emotion to the piece late in the second act, and newcomers Ana Maria Belo, and Marian Frizelle, as Shelby and Annelle, impressed. If you missed it first time around, don’t worry you can always catch it next year. Word is that because of sellout business, it will tour again in 2010.
Peter Pinne

For a play that turns on the waterworks, there are lots laughs in Steel Magnolias.
It's set in a beauty parlour owned by Truvy Jones. She loves to tells customers that there is no such thing as natural beauty … hence they should spend money at her business.
The part is played by Jacki Weaver. Her entrance brings immediate comparisons to Dolly Parton, who played the role in the acclaimed movie. On opening night she was obviously nervous and didn't quite nail the Southern American Accent.
Another favourite saying of Truvy Jones is that no-one in the parlour cries on their own. The same could be said about those in the audience. My wife shed many tears as the sad story unfolded.
Steel Magnolias was beautifully directed by Darren Yap with a well balanced and strong cast.
I felt that the stand out performer was Geraldine Turner as Ouiser Boudreaux - a cantankerous woman with a tough exterior who reveals a kind heart. She did fluff one of her best lines. To help her avoid a repeat - during the six-month tour - I'll repeat it here.
"I do not see plays, because I can nap at home for free. And I don't see movies 'cause they're trash, and they got nothin' but naked people in 'em! And I don't read books, 'cause if they're any good, they're gonna make 'em into a miniseries."
David Spicer