Stepping Out by Richard Harris 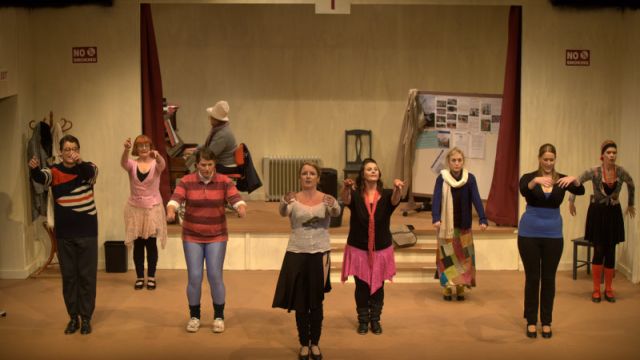 Stepping Out won the London Standard comedy award in 1984 and the programme describes it as a “highly entertaining comedy.” The show was certainly funny, but the strongest message for me concerned the external defenses we create to hide our true emotions. The two performers who affected me most were Garry Barcham and Donna Pope for their nervous portrayals of Geoffrey and Andy (long for ‘Ann’). Andy’s scene at the piano was especially powerful and I secretly enjoyed Geoffrey’s attention to character detail, complete with tag sticking out the collar of his shirt.
The entire cast embodied their characters well and, as an ensemble, they maintained the most consistent accents I have heard for quite some time. I expect they will only improve throughout their 23-show (!) run. Congratulations to all the performers for the final tap sequences. Once again, the parallel between the glittering exterior and pained interior can be drawn, and I was impressed with their combined abilities.
The (unfortunately large) disappointments for the night did not come from the stage but from behind me in the bio box. The music for all the tapping sequences was very low quality and had pre-recorded tapping that was distractingly different to the steps we were seeing on stage. Then, the soundtrack for the closing sequence was so loud I had to block my ears as it was actually physically painful. A sour ending to an otherwise pleasant evening.
Ian Nisbet