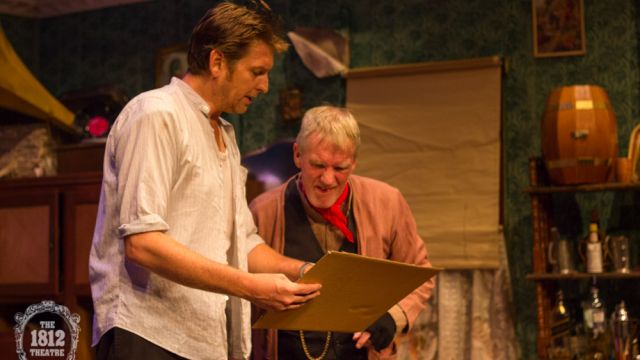 One thing is for sure, when you attend an 1812 Theatre production you are guaranteed to be hit with plentiful production values.  Last night at the opening of their Steptoe and Son – the second coming (as they performed 3 episodes of the 60’s UK sitcom in July 2015), it sure didn’t disappoint.  From the foyer ‘decorations’ (they might just be having the carpet replaced… I’m sure they didn’t rip it up just for atmosphere… although, the might just have!), to the slice of life dual focus set, bursting with rag-and-bone items, dilapidated wallpaper and fragmented cornice - beautifully crafted by Neil Barnett.

I have to admit that I have never seen the TV show.  I thought, sure, another British comedy series being portrayed on stage - it’ll be good, but nothing brilliant.  I was just expecting another basic comedy on stage.  In some regards it is; but in others it is much more. Christine Grant should be congratulated for adapting these episodes for the stage.

I felt that the pace of the first episode took a little while to get going; however it stepped into itself during the conflict between father and son and their differing attitudes towards their responsibilities to their wife/mother (who has passed these 30 years), and rose from there.

The third episode is brilliantly placed after interval, where we see the high comedy full of belly laughs appear.  Be warned, partial nudity here! I don’t think I can look at a dish mop the same again…

Keith Hutton is exceptional as Albert Steptoe.  There are not enough synonyms to describe his truly remarkable performance. His portrayal is steeped in the ‘old man’ mannerisms of the character, down to the wiggling of the eyebrows and facial ticks.  They are imbedded in his whole characterization, showing what a truly magnificent actor he is. Ed Kennett really comes into his own in the second episode as son Harold Steptoe, when we are confronted with his divergent conscience.  This is where the audience glimpses a sight at his abilities on the stage. His vocal characteristics are truly the perfect inflection of the TV character.  I would have liked to see some more mannerisms in his body, but he was a great contrast to Hutton’s boundless physical characteristics of Albert.

Susie Sparks is a pleasure to watch on stage in her small role as one of the love interests of Albert.  She captures the emotions of a woman torn between love and responsibility, such that we start to feel sorry for her and not the men.

Ann Quinn and Rosey Cullinan are justly enjoyable on stage, but are wholly upstaged by the complex relationship between father and son.

I really don’t want to say too much about the content of the show, but I can say that you really should take the night off and go to the theatre. Who’s to say if the male cast members will want to reprise their roles… for a third time (they should, they really should).

Don’t miss it or you may just regret it!