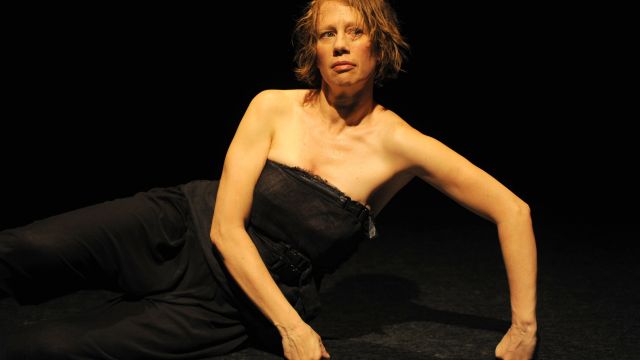 Choreographer and performer Linda Luke’s “dance poem” was initially inspired by TS Eliot’s poem Burnt Norton, that describes the changes brought about by the cyclical effects of time and the seasons in the garden of a house in the Cotswolds. It takes its title from the line “At the still point of the turning world”.

This led her to consider how society is similarly manipulated and destabilized by time and change, especially  “in our current epoch – revved up, fragmented, digitized”. She has translated this into a very esoteric and dense performance that is more movement and introspective interpretation than actual dance.

Luke, in black wearing a pair of carved wooden oriental-style platform clogs, begins lying behind a scrim, her bare legs and the clogs the only clearly visible movement – movement that is slow, stagnating, hesitant. When, eventually, she emerges from behind the scrim and, still slowly, rises to her feet on the platforms, there is further hesitance, further fragmented movement. It is almost hard to watch, even harder to interpret. Why the clogs? What do they symbolise? One symbol however, is very clear – a pendulum suspended from above the stage. Slowly, still hampered by her strange footwear, Luke sets it in motion. Its swinging and Vic McEwan’s sound design accompany the next stage of the performance, in which Luke abandons her ‘shoes’ and moves less awkwardly, but still haltingly. (There is never any of the “revved up” that she alludes to in her program notes).

This leads to moments that are easier to follow. In one Luke uses her red-lined cloak to imitate the falling petals of a fading rose in a video (Martin Fox) that fills the screen behind her. In another her hands emerge slowly from the coat, like a butterfly emerging from its chrysalid. In yet another segment, Luke is replicated in double shadows (lighting design by Clytie Smith), forming and re-forming …in one instance as three crosses. Another symbol?

The performance ends with Luke poised, almost precariously, as the pendulum slows and the sound of a heartbeat fades. Her body is still, but her head is raised and her eyes very, very slowly move to make contact across the audience, that is now also in light. A little confronting for some.

This is a strange performance, slow at times, obscure at others, saved by some images that combine sound and visuals and movement in a clever way.