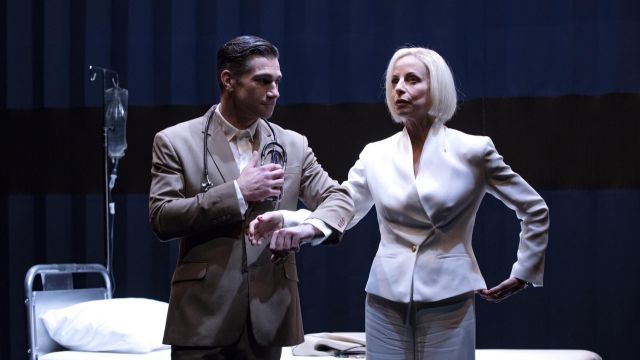 By Priscilla Jackman. Based on interviews with Catherine McGregor. Sydney Theatre Company. Wharf 1 Theatre. April 21 to May 26, 2018.

If you pitched this story as a piece of fiction it might be rejected as not plausible. The incongruity of a heterosexual man with a very healthy sex life, who works and excels in the most masculine of fields – the army, cricket commentary, and political speech writing – yet is being torn apart by acute gender dysphoria.

This startling transformation took place, not in private, but under the glare of media scrutiny. (Cricket commentator Ian Chappell wrote in the program of his shock when the transformed Cate walked into the commentator’s box. He, like most, handled it sensitively.)

Now having thrived since her transformation, Cate is in a unique position to educate us all.  On opening night she watched her life’s story unfold on stage – laughing and crying with the rest of the audience - then emerged from the darkness to take a bow with the cast on stage.

Being a brilliant wordsmith McGregor, played divinely by Heather Mitchell, acts as the narrator of the play.  It opens with Cate about to undergo gender transformation surgery, which she describes in cricket commentator mode.  In rolls the hospital curtain, the bed and surgeon. The physical aspects of the transformation however are lightly touched upon. The emotional rollercoaster is on full display with all the gory details. Episodes of her life are beautifully embellished with a choreographic intensity. The chorus float in and out, sometimes as cricket batsmen, other times as soldiers crawling through the jungle of East Timor. These moments are punctuated by McGregor putting her spin on what is happening in her life at the time, drawn ninety percent verbatim from interviews.

There are many touching moments involving the kindness of strangers and friends.  A Qantas staff member eases the way for Catherine to be accepted without any intrusive scrutiny at a boarding gate, when she goes to the airport for the first time in a wig and dress.  She goes perilously close to taking her own life when the phone rings, with the rope already around her neck. Soon she is laughing watching a sitcom on television.

The humour is very robust. On a run in Canberra, a driver of a car rolls down his window and propositions her. In no uncertain terms she tells him what he can do with his dick.

This was a startling, funny and exceptionally moving night in the theatre.