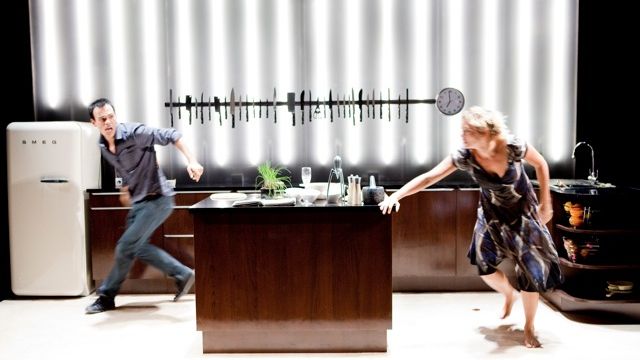 Whoa! This show is a knockout – conceptually, visually, emotionally, technically.
It defies categorisation: relationship drama, erotica, dance, circus skills, illusions, physical theatre, danger …
I suspect improvisation contributed also to the end result. So much depends on the maturity and performance relationship between the two actor-performers and the level of mutual trust that can be achieved. Each literally holds the life of the other in his/her hands. And what a charismatic pair they are … until they descend into their dark sides. This show is a parable.
While we watch Todd (Socratis Otto) and Kali (Leeanna Walsman) celebrating, pleasuring and shredding each other physically and emotionally, the violence and sex are palpable but never descend to pornography. People who have experienced a real-life intense love relationship will empathise most with the events of this couple’s evening.
The indelible memories we take away, however, could never have been achieved without the amazingly imaginative talents of the long list of techies and creatives behind the production. I applaud them all, in particular the playwright and conceptualists of Frantic Assembly’s original productions; and especially Adrienne Quartley’s sound and Andy Purves’s lighting designs. Laura Hopkins’ set and the illusions it disguises are mechanical and visual marvels.
In truth, Walsman and Otto merely clinch the audience impact of this total theatre experience. Without the ingenious concepts, direction and designs the sterling performances would impress us less, and vice versa.
Shows like this, which etch themselves on your mind forever, are rare. Go!
Jay McKee