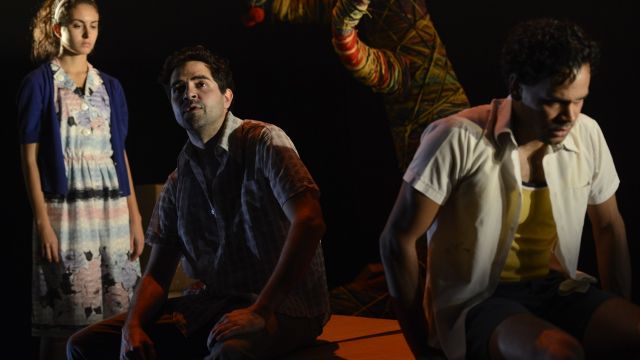 Jane Harrison’s poignant play about the experiences of the Stolen Generations has been performed all over Australia and in the UK, Hong Kong and Japan. It is apt that this new production, directed by Vicki Van Hout, opened during Reconciliation Week.

A graduate of NAISA Dance College and the Martha Graham School of Dance (New York), Van Hout has based this production solidly in her own vast study of and immersion in indigenous dance and lore and story telling. She sees the play as: “not about lives in the home care system, but of the resilience to overcome an appalling start in life … a sort of modern day urban song cycle … sung or conceived by the character Ruby, (who) because she is deemed disturbed, (can) access the Dreaming more readily. This is a subtle device which imbues the work with a more ambiguous or surrealist quality or logic”.

To achieve this more contemporary take, she has replaced the rows of beds and the suitcases of the script with a colourful yarn bombed tree designed by Imogen Ross, which she says reflects a “culture surviving and thriving in urban modernity”. An assortment of boxes and pieces of cardboard become a variety of props, just as indigenous people sometimes substituted traditional artefacts with urban equivalents. The use of the cardboard is effective at times, but at others seems unnecessary and even distracting, for example when a box is used as a collapsing sun chair.

This interpretation may be, at first, a little off-putting to those in the audience who are studying the play for HSC Drama, but it is a perfect example of how a director brings her own vision to a play, in this case a vision based on vast personal experience and accumulated knowledge.

Sounds and music (Phil Dowling) and shadowy lighting (Toby K) enhance her vision where she scenes are retold in “ a separate short songlike manner with its own rhythm mimicking the landmarks of this dreaming cycle”. 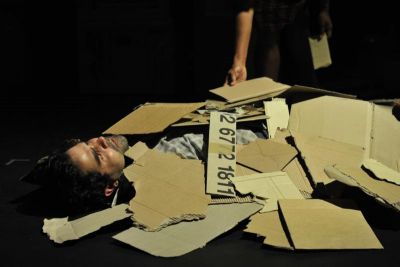 Van Hout has inter-woven and augmented the scenes with beautifully choreographed and performed dance and movement segments, that heighten the anguish and despair of the stories, yet infuse them with a renaissance of identity and hope. Despite this, some aspects of the stories are a little hard to follow as, like the different yarns on the tree, they wind over and around each other. This is exacerbated at time by lines being lost or indistinct, perhaps because the walls of the open stage, which, whilst giving the impression of space and distance, may also be absorbing some of the sound.

Bringing the stories to the stage are five accomplished performers who take on a diverse range of characters, some who were Stolen, some who were left behind, some who perpetuated the ‘process’ of assimilation … and mistreatment.

Henrietta Baird’s specific role is Shirley, whose daughter was taken away. She finds the intensity of Shirley’s character in heartfelt words and facial expressions, especially when, after many years she finds both her daughter and a grandchild. Baird moves lightly on the stage, using gesture economically, but it is in the dance segments where she really shines. Lithe and flexible, she moves with supple grace and agility.

Berthalia Selina Reuben takes on the role of Ruby, pivotal in this production because of the ‘song cycle’ conceived through her by Van Hout. Reuben is endearing as this character, finding her bright-eyed trust and innocence – as well as her hurt and humiliation. Reuben too is light on her feet, agile and nimble, using her dance experience to infuse the character. 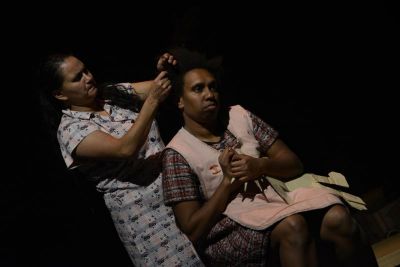 Matthew Cooper and Kerri Simpson play Jimmy and Sandy. Both actors bring out the humour as well as the pathos in these characters. They are very natural and appealing and they too move with lissome ease in dance sequences.

Matilda Brown, who graduated last year from QUT, makes her professional debut in this production as Ann, who has always been told she was special because she was “chosen”. She is, therefore, perturbed when her real background is revealed – and shocked when she talks about finding her birth mother “living in housing”. Ann’s lines here are very telling, and Van Hoot brings Brown into the audience as she repeats them – and repeats them – with very little change in pitch or volume or tempo, which somehow seems to destroy the effect.

Though I really missed the individual stories at the end of the play, which in the original production, drew the play together effectively and emotionally, this is Van Hout’s interpretation of the play which she sees as: “storytelling occurring in a kind of dreaming time, where chronology and geography are fluid and secondary to the essence of who the characters are”.

READ THE FIRST PAGES OF THIS PLAY AND BUY IT HERE.