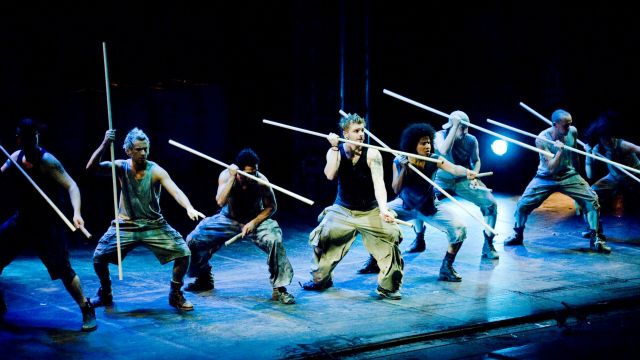 Even before the lights dimmed, two people in the audience were sure that something special would happen. Two boys aged about 8 years were wriggling with anticipation, trying to keep their voices down. Their anticipation was surely fulfilled.
The show opens in a streetscape. It could be Any Street in Any City. The difference lies in how the inhabitants relate to the space and the objets trouvés that fortuitously create interesting sounds. A simple act of sweeping the street is an opportunity to create a musical work from the ‘swish’ of broom bristles, the thump of the broom handles or the broom head, and feet stamping or gliding. Interspersed with sly touches of humour, sometimes knowing winks, it seems that the stage has been taken over by mischievous urchins who have tapped into a city’s soul. In the vigorous dance, various brooms meet their (unintentional) demise, but in the spirit of the troupe, such accidents are deftly handled with a wink and never missing a beat.
(At this point, I must add that if you come to a Stomp performance, don’t be late! Your late arrival will be noticed … and not only by other audience members.)
There’s not a dull moment in the entire show, although the pace changes from one act to another, for example, the quieter melodic piece with rubber pipes. The variety of object use means it’s hard to pick standouts, although I would have to include the desperate attempts of one performer to read his newspaper in peace, despite his friends invading his space to read their own papers, with humorous effects from accompanying rustles, coughs and worse.
The upper scaffolding of the set was an integral part of two pieces, including heartstopping swinging that required good nerves and immaculate timing. Indeed, just as one thought “They’ve used everything but the kitchen sink”, sure enough, there was a dance for four kitchen sinks. A drawback of the show is the use of certain basic beats and riffs with an underlying 4/4 pulse. While giving a certain thematic unity, after a while it becomes repetitious.
Sound and lighting design and engineering by Paul Emery, Nick Lythgoe and Pete Cudmore showed imaginative yet meticulous interaction with the performers, their actions and their space.
At the end of the performance, the loud applause said it all, really. Everyone, from children to grandparents and all in between had been on a journey of pulse, movement and creativity. With rhythms still pulsing in our chests, we poured outside into the crisp autumn night. Undeterred by the chill, the boys were now trying out their new percussive dance moves.
Rachel McGrath-Kerr