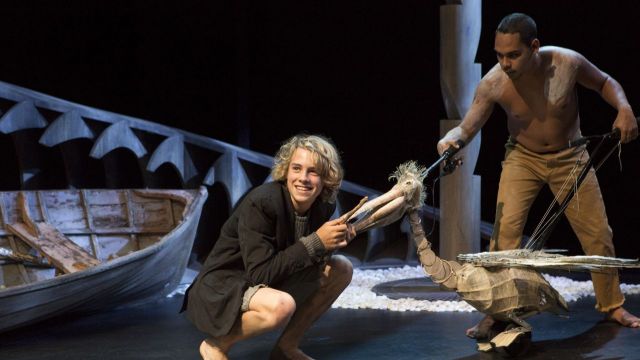 Tom Holloway’s sensitive adaptation of Colin Thiele’s timeless story of a boy and a pelican has returned to Sydney before beginning a national tour. Under the direction of John Sheedy, Storm Boy, Mr Percival and the great sweeping sand dunes of the Coorong itself come to life on the evocative landscape suggested by Michael Scott-Mitchell’s set and the incredible puppets he has designed.

A huge whalebone curves eerily across the back of the set sheltering the humpy that is Storm Boy’s home. White pebbles define the shoreline and a rowboat filled with fishing gear leans on its side in front of a totem-like lookout tower. As the lights dim to black, there is a crash of thunder and flashes of lightning as a storm hits the Coorong.

So begins this re-telling of a story that has charmed three or four generations of Australian children – and gently introduced them to the issues of sadness, friendship, love, loss and change. The character of Storm Boy requires a range of emotional responses from its young actors. Rory Potter approaches this role with a mature, natural interpretation that defines the diffident relationship with his father, the developing friendship and trust in Fingerbone Bill, and the strength, acceptance and self-awareness that comes with his care and love for the pelicans. All three young actors must revel in the opportunities and the intensity this role offers.

As Hideaway Tom, Julian Garner is curt and wary. He holds his real emotions in tight check, but they hover beneath the gruff exterior, kept at bay to protect the boy, and himself. Garner does this well, evincing sympathy as, a little at a time, he gives in to the boy – and, in doing so, eventually overcomes his reluctance to show his real feelings.

Jimi Bani is an engaging and lovable as Fingerbone Bill. His eyes dance as he tells his jokes, or, more seriously, teaches Storm Boy about his land and its animals – and through this earns the trust of Hideaway Tom. His dance-like movements emulate those of the spirit-like figures of two dancers poised above him on the whale bone, or crouched around the totem – watching silently.

These dancers come into their own as they operate the adult pelican puppets that follow Storm Boy around the stage. Almost transparent, the bodies of the puppets are made from thin fabric stretched across a skeletal frame. Their long beaks rattle and their beady eyes make them seem almost real.They waddle on webbed feet attached to wheels, propelled from behind by Mayor and Walford who also provide their low, squawking voices – or soar on wide wings made of feathers attached along a folding wire frame. With wings outstretched, these puppets are life size and rise up above the stage and the audience in awesome flight. Their appeal to the audience is as engaging as the ‘live’ performers.

This re-telling of a much-loved story misses none of the poignancy of the original book. It retains the “unexpected education of belonging, connection to the natural land, loss and letting go … in an almost Dreamtime approach” (John Sheedy, director). Like the Thiele’s book, Holloway’s adaptation speaks softly and gently to its audience, both young and old, through the deft portrayal of each of the heart-warming characters – and through the enduring spirit of Mr Percival himself.