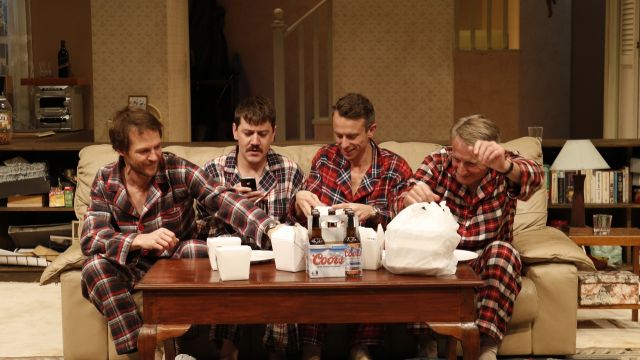 Young Jean Lee is an acclaimed and respected dramatist in New York City.  Each of her varied productions, which she directs herself, are, apparently, edgy, iconoclastic, experimental, provocative, confrontational and excitedly anticipated across the US.  She receives such accolades as ‘ever audacious’ and ‘the most adventurous downtown [but certainly not mainstream] playwright of her generation’.

The New York Times called Straight White Men ‘fascinating, compassionate and stimulating’.  The Daily News: ‘smart and though provoking.’  New York Magazine: ‘Gripping, a play of ideas and very timely ideas at that.’  Well, sorry: I am about to differ.

Nevertheless, high expectations beforehand therefore for this Melbourne Theatre Company production.  It’s in the hands of the very experienced director Sarah Giles, who has said that she has followed the playwright’s instructions to the letter.  Likewise, it seems, in designer Eugyeene Teh’s departure from his work with the Little Creatures Theatre.  His set is completely ‘real’: a bland, beige, comfortable, middle-class ‘family room’ – just like the set for a bland, comfortable, middle-class sit-com.

Ms Lee’s first way of unsettling her audience in this case is by overturning the likely expectation that her play will be a satirical attack on puffed-up, blinkered, misogynist patriarchs – which would be all too easy, after all.  (Although the play might be a rather gentle satire on many men’s refusal to grow up.)  On the contrary, the characters – widower father Ed (John Gaden), a retired engineer, and three sons, Matt (Gareth Reeves), a temp worker at charities, Jake (Luke Ryan), a banker, and the youngest, Drew (Hamish Michael), novelist and teacher - are all quite well aware of their privileged status as straight white males, having had this drummed into them by their deceased mother.  She even repurposed the family’s Monopoly board game as ‘Privilege’ in which the ‘Chance’ cards are ‘Penalty’ cards.  E.g. ‘Deny racism – pay $200.’

The play’s central burden is how each of these men deals with this awareness.  Drew is a believer in therapy and mental health; his last novel was ‘an assault on American materialism’.  At the same time, Drew can’t sustain a relationship, is the most markedly childish of the three and sulks when his ‘help’ is rejected.  (It is hard to believe this fellow could write a novel, let alone one that attacked American materialism.)  Jake, who was married to a black woman but is now divorced, is vociferously defiant that his solution is to ignore what Mother told them and just to get on with dealing with the real world, which is the way it is.  As a punchy bit of hypocrisy, this is good. But the crux is that Matt, the eldest, the most brilliant and from whom the most was expected, can’t deal with his awareness of privilege at all.  He has withdrawn from academe and just about everything else into being his kindly Dad’s housekeeper and doing occasional temp work – largely unpaid, we gather – for worthy causes.

The play takes a definite plunge into its real concerns (and about time too) when Matt bursts into helpless weeping during Christmas Eve dinner.  He can’t – or won’t – explain why, so his father and brothers try to do it for him.  Father Ed has a simple explanation and tries to fix things with a single, generous gesture – which Matt refuses.  Of course he does.  It’s Ms Lee’s thesis that a deep awareness of privilege can be paralysing - because all of us have a fundamental psychological investment in the system that includes straight white male dominance and control.

Straight White Men is, after all, much more a play of ideas than a domestic drama; the ideas are uppermost – even if where we finish up is a dead end.  And for me, there are some crucial flaws in Ms Lee’s case.  First, those ‘timely’ ideas in this play are not all that new and I suggest that only a really entrenched patriarchy – which, yes, hangs on tooth and claw - could think they are.  Susan Falludi’s book Stiffed canvassed male confusion, inability to adapt and despair in some detail, including the exploitation of men, back in 1999 – and the program notes acknowledge that.

Matt refuses his father’s practical help and his brothers’ suggestions of ways out of his stasis.  But the play seems to conflate doing something with ‘achievement’ – or what Drew calls ‘self-actualisation’.  It’s as if ‘achievement’ is all there is – and the acceptance of non-achievement drives Dad and the boys into a fury.  Maybe this is itself a quite profound provocation by Ms Lee, but I don’t think so.  Matt’s whiney refrain is that he just wants to be useful – to which I could only think, ‘Well there are many way of being “useful” in this world, mate – ways that need not at all exploit straight white male privilege.’

Unfortunately, Matt’s ‘existential’ dilemma can be interpreted all too easily as self-pity, or as fear of the risk involved in moving out of the safety of despair.  Or it’s even clinical depression – much as this is Drew’s trite suggestion.  These interpretations are rather reinforced by the casting of Gareth Reeves as Matt.  This is no reflection on Mr Reeves: he plays his character with an obliging, recessive sweetness as cover for his opaque immovability.  That’s what eventually becomes grating, provoking his brothers’ and father’s exasperation.  But Matt is, as written, the eldest of the three brothers; and Mr Reeves looks like the youngest.  Matt is intended to be in his 40s, greying at the temples, maybe even getting a little flabby.  Mr Reeves is none of these things – and such traits would make Matt seem sad – rather than pathetic. Meanwhile, Hamish Michael, always an actor of intriguing weight and presence, is meant to be Drew, the youngest, but he looks (and acts, I’m afraid) like the eldest.  Yes, the dialogue clarifies things, but it contradicts our first and rather indelible impression.  Luke Ryan’s Jake is fine – as fine as an exponent of an ideological position can possibly be: he is muscular, gluttonous but aggressively healthy and Mr Ryan plays his rationalisations masquerading as realistic certainties extremely well.  John Gaden is always a pleasure to watch and the more so here in what is mostly a comic role.

Among Ms Lee’s means of unsettling us is a sort of alienation technique – i.e. this might be naturalism, but don’t forget it’s a play.   Thus Candy Bowers is the ‘Stagehand-in-Charge’, who addresses the audience directly, telling us, for instance, that the actors will pretend that we are not there, and blatantly redresses the set, fully lit, with brusque prop changes.  These things Ms Bowers does with maximum pizazz and sublime indifference to the play and its suffering characters.

The text is Ms Lee’s first foray into ‘naturalism’ – at which, says the New York Times, she is ‘adept’.  I’d have to say that she’s not that good at it – unless ‘naturalism’ means including what might ‘really happen’ when three adult boys spend Christmas with their father, regress, fool around, chiack, wear silly matching pyjamas, sing politically incorrect songs, mime gay sex and get drunk and hung-over.  I should add that sections of the opening night audience did find this stuff hilarious, but there was a tinge of that determination to be amused that comes with an expensive ticket.

Rather than development, the play is a series of moments, of bursts of attitudinising.  Nor really is it that confrontational.  I can’t say I was affronted or challenged – which I was waiting, even hoping, to be - until the very last exchange of the play in which Matt, with whom I had entirely lost patience, responds to his father with a remark that is either totally nihilistic or simply childishly petulant.  I realise I am at odds here with the acclaim that has greeted this play.  If you find its ideas new or ‘timely’ and horseplay and hangovers amusing you may be provoked and entertained.  I was left bemused or rather ‘provoked’ only by wondering what all the fuss is about.