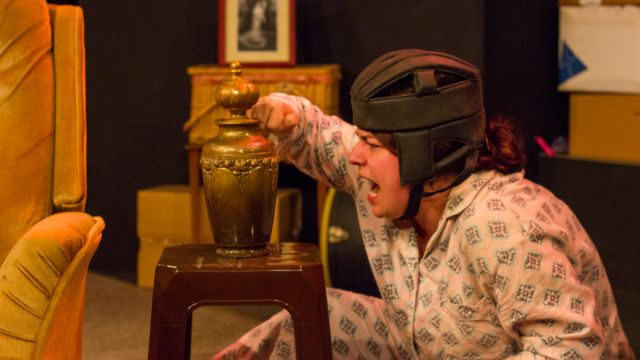 As I left the Bakery@1812 last night, I was surrounded by the silent wiping of tears from eyes and softly felt sniffles as the entire house was physically and emotionally moved from the performance they just witnessed.

Peta Brady’s poignant play Strands is about two sisters exasperatingly living in their own world, whilst also living and loving for each other. Sisterly love and frustration, stories within truths, and the strands that bind a family together help create this short but compassionate play.

Destiny, a bitter and resentful woman, silently packs up their Nan’s house after her death, in order to move on with her own life and to gain the things that she never had growing up. She is emotionally damaged by her upbringing and is just handing on by a strand.

Hope, her younger sister, attempts to understand what is happening and why she needs to go and “live with the Nans in the big house”.  She has Foetal Alcohol Syndrome (the result of a mix of syphilis and alcoholism from their mother) and even though she is in her early twenties, the only place that can best serve her needs for the remainder of her life is a Nursing Home.

Through ‘stories’ told by Destiny to Hope, we slowly find the unraveling threads of their life so far.  After being taken away by the authorities and raised by their Nan, the girls each search for their fragile and confused existence into the world. Director John Bishop doesn’t allow the emotionally wrought story to become melodramatic, but lets the two actors speak truth though their movement and voice; heightening the slight humorous moments to juxtapose the dark.

Angela Ellis plays the defensive Destiny with truth and a raw emotional touch that sits just below the surface, not allowing it to rise until the breaking point.  Ellis, as Destiny, shields herself from her situation and strikingly keeps her movements and voice in check. Even the sirens from the local SES blaring in the middle of the performance didn’t put her off (she should have raised her voice a touch to be heard over them though).

She is strong and resilient but broken underneath.

Danielle Payet is mesmerizing as the intellectually disabled Hope. The physical and mental exertion needed to play that role is unforgiving, yet Payet moved though the character with ease, making sure we couldn’t take our eyes off her. Payet shows the fragility and innocence that Hope has, whist also displaying the determination she felt that their mother truly did love them, despite their abandonment.

She is broken but strong and resilient underneath.

Both Ellis and Payet manipulated the affecting and exquisitely written material beautifully and crafted a sibling relationship that was authentic and heart wrenching. Their skill and talents made us truly care for their ‘strands’ in the world.