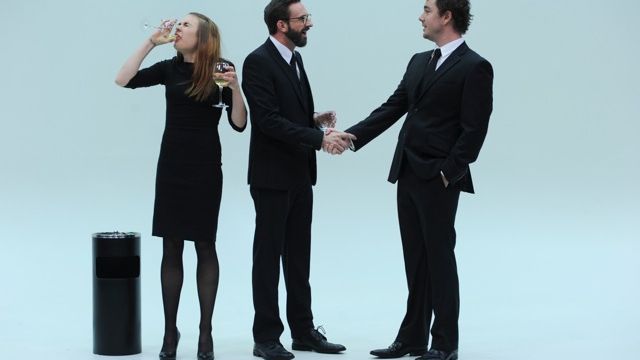 One of dramatic history’s most famous yet least produced plays, Eugene O’Neill’s 1928 Pulitzer Prize winning Strange Interlude, nearly gets a rare showing at the Belvoir. The bones of the modernistic milestone are there, but the original post-Great-War characters can only be perceived through a filter of laptops, smartphones and obscenity-laden Aussie language. For this is Simon Stone’s Strange Encounter, not O’Neill’s.

Stone is a brilliant young director working on a beautifully simple set (by Robert Cousins) with fine, committed actors, so the production is compelling, funny and moving. The house is full and the bookings are strong. It’s a great night but, let’s face it, it ain’t O’Neill.

Troubled, distraught Nina (Emily Barclay) has lost her airman fiancé in combat (over Iraq?). They had never consummated their love, and the remaining men in her life try hard to comfort her. These include her professor father (Anthony Phelan), his former star pupil known to Nina as Uncle Charlie (Mitchell Butel), fast-talking doctor/psychologist Ned (Toby Schmitz), and goofily likeable Ben (Toby Truslove).

Needless to say, Charles, Ned and Ben are all hopelessly in fragile Nina’s thrall, and they often reveal their desires and fears to the audience in a series of asides. Such asides and longer soliloquies are what made the O’Neill original so notoriously ground breaking: Stone includes them in much abbreviated form. The tattooed Barclay convincingly drives her declared and/or secretive suitors to near distraction over the 25 year span of the action. Truslove is a fine comedian whose Ben starts as hopelessly shy and grows unexpectedly into a wealthy bully. Butel’s wounded Uncle Charlie becomes increasingly bitter and dangerous: a fine study.

The total update fails badly with Ben’s mother, played with deadpan seriousness by Kris McQuade. O’Neill’s subplot about genetic madness and necessary abortion belongs firmly to the early 20th century, along with the consumption that drives O’Neill characters in other famous plays. Despite McQuades’ best efforts, her big scene tips into giggles-inducing melodrama.

In a lengthy program note, the rising young Stone insists that all ‘productions of plays from different eras should be seen as translations’ from another language and culture. He aims to ‘suspend a play between the moment it was conceived by its original author and the moment it is presented to the audience’.

He’s certainly created a powerful piece of 2012 theatre here. But if we want to experience what the original author originally wrote we’re just going to have to wait for the next production to come along.