A Stranger in Town. 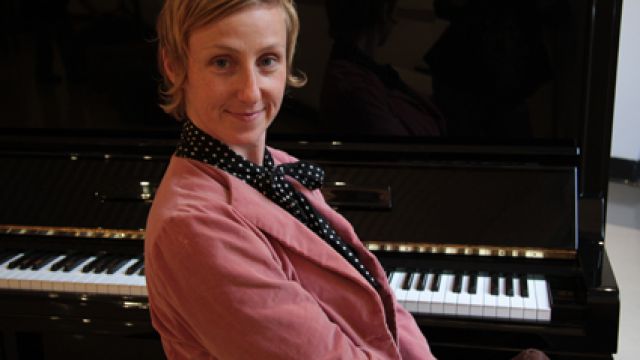 Precious memories are at play in this eloquent and involving memory play – imaginatively, impeccably, lovingly, and often quite beautifully, delivered to the stage by Ms Bishop and performed by a uniformly excellent cast, who handle their challenging multiple roles with pure theatrical instinct and immense skill.

As the ghosts of journeymen and women – past and present – take their places on the side of the stage (both shadowed and illuminated by Mr Vabre’s excellent and always atmospheric lighting design), Otto Lampel (Drew Tingwell) begins his journey across the Atlantic on a boat bound for Canada. It is the late 1940’s – and Mr Lampel, a Czechoslovakian Jew – is beginning an immensely personal and equally dangerous journey to discover the essence of his humanity … and what remains of his identity.

Having fled Prague at the start of World War II – the only member of his family to survive Nazi-led genocide – Lampel is haunted by wartime horrors (quite brilliantly realised in an ingenious mountaintop scene) and the extent to which his spirit has been so rigorously interrogated that he has become an unreliable witness of his own life’s values and accord.

The highlights of Ms Croyden’s multi-layered, cryptic, symbolic and richly-allegorical script are many – with the stakes at play powerfully underlined when one of Mr Lampel’s earlier travelling companions collapses into the restaurant he has been frequenting. It’s a heart-breaking moment of stark realisation (and breathtakingly well done), which brings sharply into focus the risks our fellow human beings are prepared to chance in order to flee persecution with something akin to blind optimism and indefatigable hope for a brighter future.

While it certainly resonates with our nation’s own asylum-seeker dilemmasand their attendant perverse lack of fundamental regard for humanity and personal history, A Stranger in Town never feels like it is trying to be worthy and earnest issues-based theatre. It dances, instead, with artful and poetic adventurousness – and is grounded by Ms Bishop’s gorgeous and evocative costumes into which the cast change on each darkened side of the stage, having plucked them from within a motley collection of suitcases. It is a brilliant theatrical device – perhaps no more effortlessly incorporated than when Otto’s frosty, strident wife (Ms Lampel rising to the occasion again) arrives in Montreal from London to determine for herself whether her husband intends to return with her to their son in London. The cryptic contents of the satchel she brings with her are, under Otto’s orders later, to be burned. It’s an incisive moment entirely lacking in sentimentality – one of the many fine qualities A Stranger in Town boasts.

Mr Lotherington’s pre-recorded original score (which was certainly not helped on opening night by a stubbornly recalcitrant speaker) could do with a judicious prune – particularly some of the underscoring which, in the presence of such fine performances, occasionally tends to rather unsubtly underline the fact that this is a ‘musical’ fable as opposed to serving the text and the performances of it as insightfully as the stagecraft does.

The original songs (based on Otto Lampel’s musical diary which was recorded in Canada) are fine and engaging, however the duet between Otto’s new lover and his English wife only serves to spark an surprisingly discomforting comparison with an identical moment between Miss Saigon’s Kim and Ellen. (It is, in fact, so completely jarring that the show would be none the poorer for its loss altogether.) Mr Tingwell does, however, prove himself to be a fine pianist and the cast acquit their musical responsibilities in fine form.

Ultimately, A Stranger in Town’s profound, overriding sense of optimism for a life of love, happiness and understanding is thoroughly engaging – and Essential Theatre should be encouraged to refine it further and set sail with it to the European festival circuit where, I suspect, it will be an absolutely unqualified success.