Striptease and Out at Sea 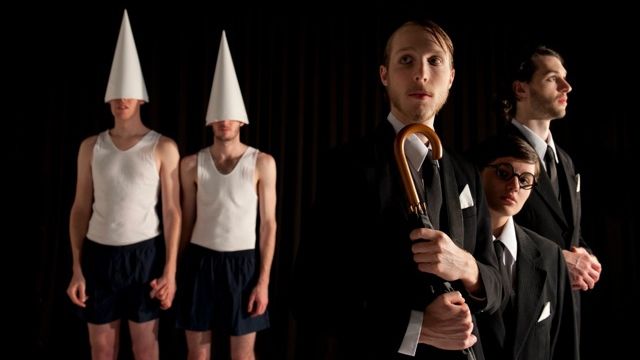 Striptease and Out at Sea are two absurdist one-act plays by Polish playwright Slawomir Mrozek, and they make a striking but challenging double bill.

Striptease is an exploration of what it means not to be free.  Two people are imprisoned in a room by unknown jailers and for unknown reasons.  One is content to do nothing and accept his fate. By doing nothing, by not making decisions, he argues that in fact he remains free because he has all options available to him, even though he never uses them. (Why did so many choose not to rise up in the Holocaust of World war II and simply accept their fate?) The other does the opposite, and is prepared to do whatever it takes to protest. However, regardless of the course of action (or inaction) there is a cost, and a giant Monty Pythonesque hand enters the room through a gap in the wall and demands penances from both men – an article of clothing. Eventually both men are reduced to their underwear and are forced to handcuff themselves to each other.  (Memories of Abu Ghraib Prison?) As each layer of clothing is sacrificed, the two men rationalise their reasons for complying with the demands of their protagonist, and the audience grapples with how extremes in society deal with extreme demands of government. Perhaps?

Director David Hirst extracts superb physical humour from Loki Reef and Olivia Fairweather. These two young actors work well together and have comic timing in buckets. They handle the demanding script with apparent ease. The set is stark and works well.

The ending of the play was dramatic. The prison room opens up and allows both men to take to the world. They don large cone shaped head pieces reminiscent of white supremacist garb and leave the stage as a bleak and surreal raft is trucked in, which turns out to be the set for the next play.

During the interval the SM and ASM–dressed in evening wear–took to the stage and in choreographed moves prepared the set for Out at Sea.  It was fascinating.  The cast then came on stage and quietly occupied the set and patiently waited for five minutes. They observed each other and the audience and the horizon and established a strong sense of isolation. In Out at Sea, three men are stranded at sea on a raft and are starving. Inevitably they consider cannibalism and the rest of the play is about them deciding who is going to be consumed by the other two. The fun is in the methods they use to arrive at a decision. They explore democracy and autocracy, bureaucracy and diplomacy, but eventually the wheeling and dealing leads to the decision that the fat one should sacrifice himself. Interestingly, as the ‘victim’ prepares himself to be sacrificed, he becomes increasingly convinced that he is doing a noble thing. (The ruling class spins its magic on its foot soldiers again.)

Director Glenn Hayden moves his cast easily on the confined playing space of the raft, and sight line problems are minor.  Mr Small is beautifully played by Poppy Mee, and Patrick Zoerner plays Mr Big with the right amount of superiority. Max Garcia Underwood flip-flops convincingly between the two as he determines where his allegiances will lie. Felix Alpers-Kneebone caps off a capable cast in his cameo role.

The play ends with the raft retreating upstage as the two ‘cone heads’ from Striptease return to the stage and the circle is strangely complete.

This was a challenging night of theatre. Absurdist plays are never easy to sit through and the temptation is to go searching for the hidden message to make sense of it all.  Most times it is obscure, and this double bill is no exception.  Thankfully Glenn Hayden and David Hirst concentrate on how their actors work with the script, the set and with each other, and the result is a great deal of fun – weird fun – but fun nonetheless.

Urban Myth has pulled a strange rabbit out of the bag, and its worthy of your attention.