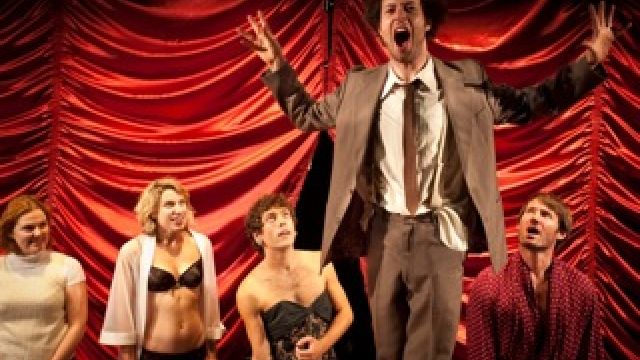 Cloaked in a synthetic haze and with a floor covered in road-base, the mood is already heavily burdened with metaphor when the ensemble suddenly bursts onto the stage for a robust vocal rendition of a chamber orchestra. And so begins this delightfully off-beat production. With no prior knowledge of the source material and a fully Australianised re-working of the dialogue, the former references to Soviet oppression were lost on this reviewer, but the themes of commercial opportunism were still resonantly universal. Part absurdist, part satire, part farce, with a pinch of drama and a generous dollop of impro - the end result felt more like a 'happening' than a play.
Small quibbles about the occasional saggy moments in the middle are made inconsequential by the sheer guts and energy of this versatile cast – who literally bounced off the walls (and the very unforgiving floor) leaving the audience gasping from their sheer commitment. Kudos to Stone for making such great use of the space and everyone in it - and managing to make us all feel so at home with this crazy bunch of foreigners.
Rose Cooper