Summer of the 17th Doll 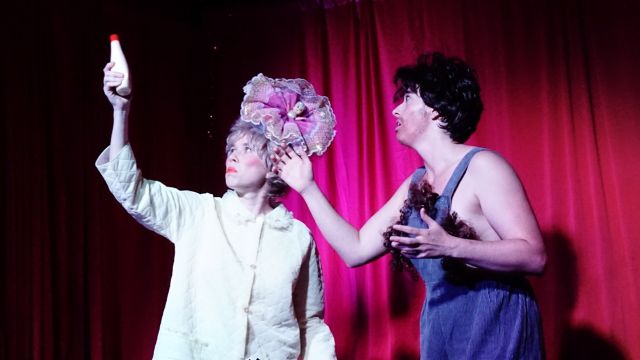 The Summer of the 17th Doll?  The 1955 Australian classic by Ray Lawler?  Well, not exactly.  Anyone familiar with the work of PO PO MO CO knows it couldn’t be. As they say in their publicity, they – and their friends – ‘take a meat cleaver’ to the play.  Well, they have a go.  The play tells the naturalistic story of the seventeenth visit of two cane cutters, Roo and Barney, flush with their pay cheques, to Melbourne.  Their ever-reliable sheilas have been Olive (Roo brings a kewpie doll, hence the play’s title, for her) and Nancy – but now Nancy has got married (hard cheese, Barney) and so good-time-girl Olive substitutes her friend Pearl. Will things work out?  Olive’s Mum Emma doesn’t think so: no one’s getting any younger.

Given the seventeen-year time span of these relationships, we can infer that some kind of love is involved…  and it is that aspect, in one form or another, that PO PO MO CO and their LBGTI friends play with. They riff on it, they subvert it, they fool around with it and they certainly gender bend it. Some contributions by the ‘friends’ have a very tenuous connection to the ostensible subject – or inspiration - but no matter - if they are entertaining in themselves. 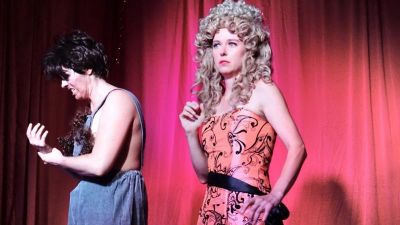 Kerith Manderson-Galvin and Freya Pragt stare soulfully into each other’s eyes for what seems an interminable time, deflate an inflatable play pen, then re-inflate it – or begin to. The performers realise (could it be for the first time in front of an audience?) that they have made their point, and that watching the thing reinflate all the way is probably stretching the audience’s patience – and they take their large prop and themselves off.  Perhaps more than a metaphor is needed given their time on stage?

Nikki Vivica, looking like a wanna-be-glam Mum off to the races, delivers a kind of stand-up routine about how as a little boy her real desires were denied; she was given boy’s toys, forcing her persona into a false role. She longed for a doll - or dolls - and now dolls are an obsession. It’s a strong idea and clearly hit a nerve with many in the audience.

Christian Gillett and Teddy Dunn are a fractious duo, one aggressive, the other cringing solicitude – and was there a reference here to Fassbinder’s Querelle (1982) with the cute sailor’s hat? This pair have considerable scary presence, but – my loss, I’m sure – any connection to the Doll escaped me. 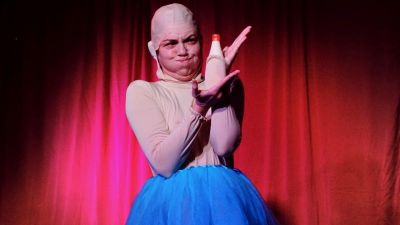 The Botticelli Angels – Adeline Esther, Angela Fouhy, Holly Hudson and Caito Zacharias – are very clear – and funny and disturbing. First there’s a baby, a large baby, who goo-goos and gah-gahs and produces a bottle of what looks like Japanese mayonnaise from her/his sleeve. This is funny for a while, but then three women in negligees more or less tumble onto the stage, excited, flushed, wild-eyed, torrid, their copious lipstick smeared – for all the world as if they are still vibrating from some kind of glorious orgy…  only to realise, oh, no, oh, horrors, there’s a baby!  So, pushing Lawler’s childless situation further and bringing it into question?

Charity Werk, a towering, glamorous number in figure hugging green sequins rather changes the tone. The audience takes a moment to catch up: despite the drag queen trappings, her torch song is for real - and emotional and very touching – and sung beautifully with skilful segues of rhythm and style.  Excerpts from a recording of The Summer of the 17th Doll are woven into, interspersed with, a specially written song, the juxtapositions commenting on the play text in the most felt and profound comment on it.  The audience goes quiet; some (me for instance) have a lump in their throats.  And then it’s over and Charity leaves the stage with unshakeable, unbreakable dignity, despite the heartbreak song. 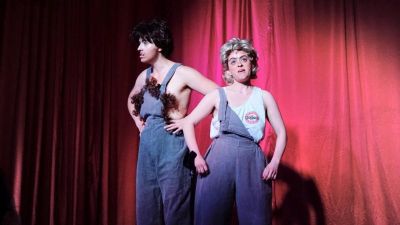 And, finally, the PO PO MO CO crew (Rebecca Church, Lily Fish, Hallie Goodman and Kimberly Twiner) take the stage to sink their comedy claws into what I think is the original Ray Lawler text, which they send up and mine for all the hidden subtext of which Lawler was quite unaware, and throw ‘love’ into question – or send it up mercilessly.  PO PO MO CO is not an outfit that works too often with text, so here, dialogue was unfortunately rushed and mumbled, with no rhythm or light and shade; thus, the sequence was much less funny than it might have been.  ‘Roo’ and ‘Barney’ (Rebecca Church and Hallie Goodman) are caricatures of manly butch blokes who just don’t get it.  Kimberly Twiner, in pursuit of satire, playing either Emma or Pearl (it’s hard to tell) goes frenetically too far over the top.  Lily Fish, however, rises above all this.  She plays her character, Olive, as some kind of deranged Southern belle, swanning about the stage and adopting exaggerated melodrama poses, and speaking clearly.  It’s as if she is in some other play, but it works and because her intention is clear and she is clear, she communicates, and she is funny.

All that said, in-jokes and insider knowledge make up the mix; the show played to an audience that I suspect knew just what to expect and they loved what they got.  And even when it risks falling on its face, this thrown-together grab bag still has an endearing vitality and sense of fun.