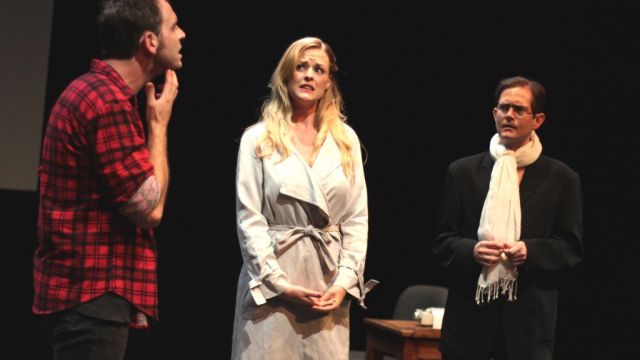 Summer of Blood has its tongue firmly in its cheek, which is probably a good thing because tongues are amongst only a few parts of various bodies not ripe for slashing or shooting in this slick and funny spoof on horror movies.

Movies about serial killers are always gory, but there’s just as much gore in the creation of them in Blancmange Productions’ screwball comedy.

Written by Robert Armstrong and produced and directed by Stephen Carnell, Summer of Blood incorporates rapid comic dialogue, fast and furious onstage combat, mini-horror movies on a big screen and plenty of blood.

Down on their luck friends, nerdy copywriter Simon (Brennan Muhoberac) and brash and ocker Bruce (Chris Miller) begin writing a low budget horror film in an attempt to make money and a name for themselves. Their relationship is torn apart when Simon’s uninhibited sister Cat (Laura Holmes) declares she's a better writer. Add in schlock movie producer Marty (Leof Kingsford-Smith) who wants total control, together with swimsuit model and aspiring actress Ivory White (Mindy Fyfe) who wants to write, direct and star in the unfolding mega flick. What you get is a recipe for murder and mayhem. The cast maintain fantastic energy levels for the entire show. However, the rapid-fire dialogue means some lines and one-liners are difficult to catch. Chris Miller stands out as brash Bruce, a guy who never loses enthusiasm for his own wild ideas. Brennan Muhoberac is terrific as the nerdy writer whose only claim to fame is to write ‘Angela’s Ashtray’, but who discovers he has a greater knack for serial killing than he realised. Mindy Fyfe is a delightfully scheming femme fatale/victim and Laura Holmes is totally ‘out there’ as Simon’s sister Cat. Leof Kingsford-Smith embodies the classic stereotype of a womanising, heartless movie producer.

The show was slightly too long for me; its pace is more exhausting for the audience than for the cast, it seems.

However, the final gory scenes are fantastic and this is one horror movie where you’re unlikely to guess the ending.

Link to our preview and more details