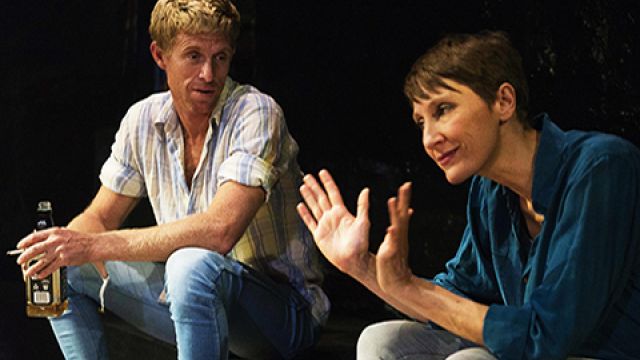 Everything in Suzie Miller’s new play is not what’s expected. For example, it’s title. Sunset Strip, the name of the holiday spot where Ray brought up his two girls, Phoebe and Caroline, is now a dust bowl, the lake completely dried up. Audiences should approach the action, the characters and everything they say with utmost caution.

The opening night audience hung on every new turn as the plot lurched to the left and the right. This was to be lauded as the cast numbered only four and we thought we had things sorted after a few opening minutes. No chance.

City lawyer Caroline (Georgina Symes) comes to visit single mum Phoebe (Emma Jackson) who is overjoyed to see her sister again. Also in the house is father Ray (Lex Marinos), left with only occasional flashes of his former self, and Teddy (Simon Lyndon), the man who Phoebe secretly plans to marry the next day. Caroline and Teddy were once an item, though Phoebe doesn’t suspect. For Phoebe, like everything else, it’s all fabulous. 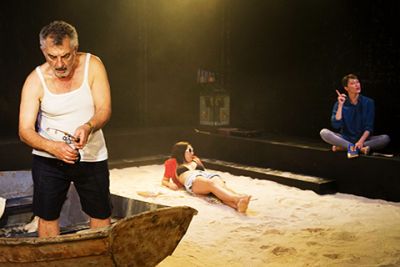 This is only the start of things as the family comes to terms with the past and each character has to reveal something – everything - about themselves. Beautifully played by the entire cast, Sunset Strip is a stand-out in this season at the Stables.

Lex Marinos and Simon Lyndon are excellent. Teddy tries hard to stand up to Caroline: “You’ve obviously had a lot of therapy,” she quips. Razor-thin, damaged, Georgina Symes battles brilliantly to keep her thoughts under control.

Emma Jackson’s Phoebe is the joy of this production. Slipping and sliding through a host of contradictory feelings, she shows total commitment to her soon-to-be-returned children, her frazzled father, her sister, her man.