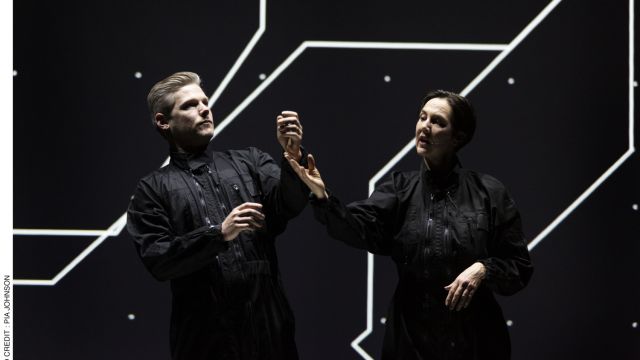 How to describe or characterise this stunning work?  Performance art?  Installation with human figures?  It holds the audience in rapt attention.  Two ‘performers’ – Tamara Saulwick and Alisdair Macindoe – in black, zippered jumpsuits, sit at either side of the deep playing space – the floor of which is a kind of huge circuit board.  Each ‘plays’ – or manipulates – a white light console and their uncoordinated movements, touches and strokes, create both sounds and geometric shapes on the huge cyclorama behind them.

Later, they will employ the whole space, sometimes lit, sometimes in silhouette, interacting with the ‘electronically conductive tape which functions as a live circuit activated by touch’ – as the program notes has it.  Of course, we attempt at first to make sense of their movements and the sounds and shapes they generate – but there is no necessary connection.  Sound – and snatches of spoken words – continue to make shapes and, later, binary code and dense, ‘explanatory’ text filling and overwhelming the cyclorama – and also the spectator. 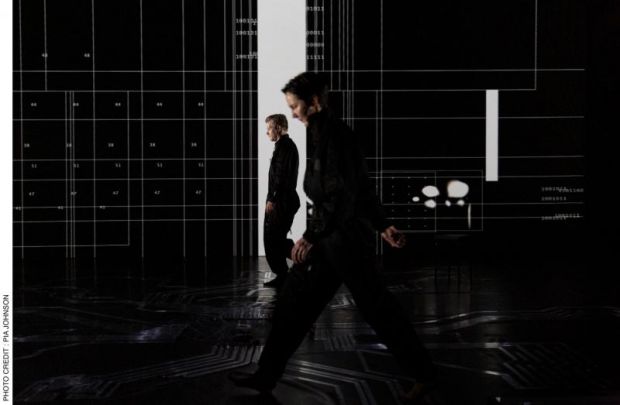 There is no cause-and-effect logic, and yet we are engaged – even if sometimes puzzled or left behind- and every moment is precisely calculated and achieved.  There is no narrative, as such, and yet it develops, taking us deeper and deeper into the questions it poses.  Those questions are to do with the ‘systems’ that we are, and the systems we inhabit, use, integrate with and are controlled by – and within those systems there are errors.  Do we have agency?  What is in control?  As SYSTEM_ERROR creates a nexus between sound and performance, so too it asks where we are in the nexus between ‘human’ and technology.

This is a creation within which are numerous paradoxes.  It is abstract and ‘cold’, and yet it engenders a fruitful turmoil and a melancholy in the spectator.  The performers do not connect with the audience in any obvious way – but they do.  Nor do they connect with each other – except for one moving interlude.  With economic and moving text by Emilie Collyer, Ms Saulwick might be a therapist or a scientist conducting an experiment, and Mr Macindoe (a patient?) – emerging from a coma? He attempts to fix the moment where he became/becomes genuinely conscious.  Of himself?  Or the world in which he lives? 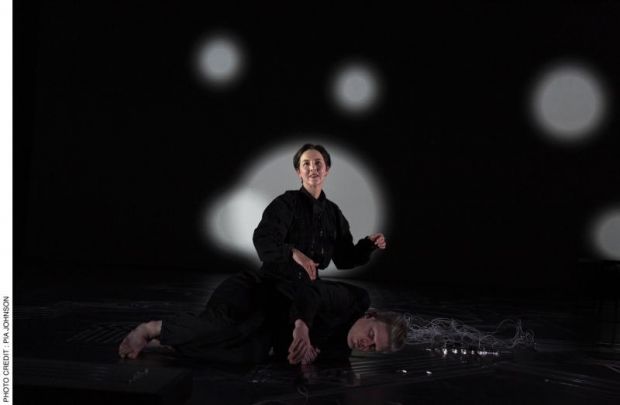 Chamber Made say on their website that their aim is to create works where ‘music, sound and performance meet… to defy, challenge and renegotiate artform boundaries’.  They do that here, in this co-ordinated and collaborative work.  The ‘vast, bespoke instrument’ is designed by Mr Macindoe, who is also a dancer.  The highly imaginative data visualisation, generated by the sounds and words is by Melanie Huang. The audio engineer is Nick Roux and the perfectly judged lighting is by Amelia Lever-Davidson.  Here is a work that evokes a powerful emotional effect by highly original means.  It is rather astonishing that this thoughtful and highly evolved show is having such a short run.