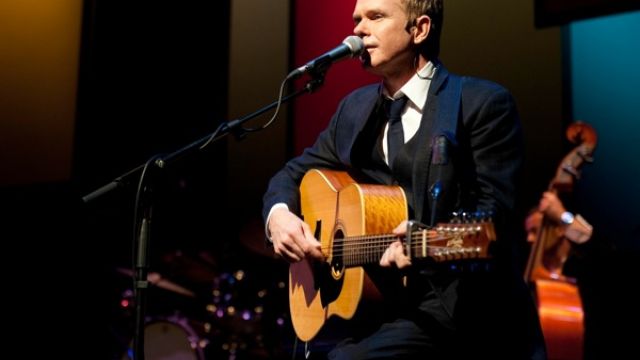 If I had to sum up Take Me Home Country Roads in one sentence it would have to be “good songs, well played and well sung,” but of course it’s much more than that. Rick Price’s tribute to John Denver, his life and his music falls into a new breed of show – the bio-concert. The same producers have already given us The Man in Black – the Johnny Cash Story, and recently at the same theatre we’ve seen Melinda Schneider with her tribute to Doris Day So Much more Than the Girl Next Door, now comes the same treatment of Denver.

It’s a one-man concert with the story of his life in between. Starting with “Take Me Home Country Roads” and following with Denver’s swag of hits, “Thank God I’m A Country Boy,” “Sunshine on my Shoulders,” “Rocky Mountain High,” “Leaving On A Jet Plane” and “Annie’s Song,” Price captures the essence of Denver in his vocals. It’s not an impersonation, but a singer who knows how to handle this material. Backed by the superb Colorado Quartet, the songs and arrangements all have that popular rockabilly feel.

With Ed Bates on pedal steel, Tim Mathew on bass, Roger Bergodaz on drums, and Luke Moller with violin and mandolin, these musicians are more than a backing group, they’re stars in their own right. Price is no slouch either, playing acoustic guitar and piano. One of the best songs of the night was when he was at the keyboard softly singing “Perhaps Love.”

There’s plenty of dramatic material in Denver’s personal life; his love of flying, his fight for the environment, alcoholism, his marriages and divorces, his premature death, and Jim McPherson’s script touches on it all, but Price is no actor, so even though there are emotional highs and lows in the story, the narration all comes across as rather bland. Still, audiences will come for the music, and that’s what it’s all about. If you’re a fan of Denver you’ll love it. If you’re not, you’ll still enjoy this country cross-over music which makes you want to put on your cowboy boots and hat and get up and dance.