The Talents Of Darkness 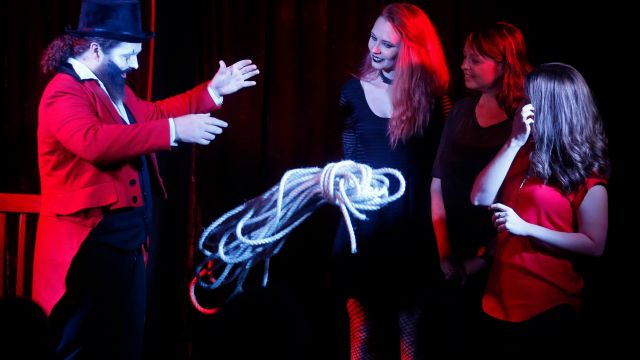 Fire breathing, fire twirling, animal traps, a glitter stapler and a confined performance space accessible only by a narrow set of steps - what can go wrong? Fortunately, due to the talents of the performers in The Talents of Darkness, nothing can and nothing did!

This small company of artists promise a night of moments that astound, scare and amuse the audience and to a large extent they deliver.

Hosted by drag queen Bebe Tricx, with some very clever patter, the evening moves along at a cracking pace. Trained in magic and fire art herself, she is an engaging host. Opening the show by decapitating a rubber phallus with a bear trap and then allowing her hand to fall prey to the trap is a master stroke. Her card trick, ending with a playing card stapled to her arm (with a glitter stapler, of course), has the audience gasping.

There is an abundance of fire art in this evening’s entertainment. A fire breather/eater who manages to make the fire dance through the air is mesmerising. Equally mesmerising is the fact his beard does not catch fire. 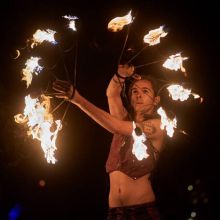 Fire twirling fans, performing with the lights out, highlights the skill of another performer as does the fire twirling up and down the body of a third fire artist. By the end of the night the audience really heated up, as did the performance space.

Choosing hoop work is probably not the best choice for such a small space. For all the performer’s talent, there were inevitable problems.

An escapologist act is an oddity these days and refreshing to see. Three members of the audience have three minutes and 100 feet of thick rope to tie the artist to a chair. The challenge is to beat the 3 minutes. With a considerable amount of grunting, writhing and a broken chair, the escape took 38 seconds!

My only reservation was the balance between the music and Bebe’s patter. For the first 5 minutes, even though she was wearing a body mike, I found it almost impossible to hear her clearly.

So, if you want a show that will amaze, amuse and challenge your ability to withstand onstage gore then The Talents of Darkness is the show for you!