Taming of the Shrew 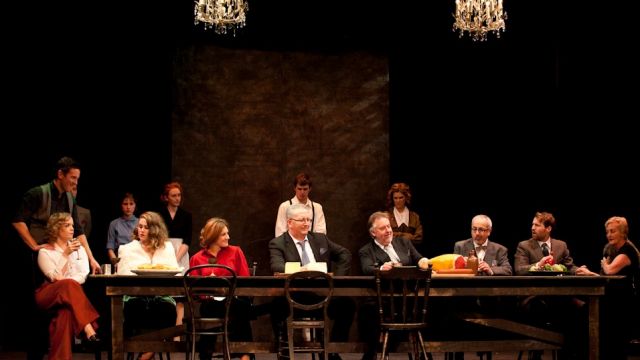 Many adaptations of Taming of the Shrew by William Shakespeare have focussed on the romantic comedy aspect of this centuries-old play. The most recent version by Hobart Repertory Theatre Society, under the direction of Julie Waddington, has a slightly different take, focussing on gender politics with a twist. Baptista has two daughters: the elder, Kate the shrew, must be married off before sweet, agreeable Bianca can be wed.

Using modern costumes, and with several characters recast as women, the play helps to make audiences think about the current marriage equality debate, a ploy which did not gain sympathy with all audience members. With some changes and abbreviations to the script, and by forgoing unnecessary exits and entrances and limiting use of props and sets, the director gave actors the scope to concentrate on the meaning of the words. With only a long banqueting table and multiple chairs as the set, and changes of scenery suggested by strong backdrop lighting, time and attention was then focussed on words and action. Andrew Casey is charming, sexy and energetic as Petruchio, an opportunistic cad, seeking a fortune by marrying Katherine. His treatment of Kate, in his attempts to tame her, can be seen as more bullying and abusive than romantic. Kate, played beautifully by Katie Robertson, is not so much shrew as an intelligent young woman who resents being treated as possession or chattel, and doesn’t want to be married off. Strong chemistry between Casey and Robertson revealed the dark undercurrents of this rather dangerous game of courtship and marriage.

Although Waddington’s Shrew contained the usual comedy ingredients: mistaken identity, cross dressing, disappointed suitors and servants impersonating masters, the underlying theme of women as property and men as masters was highlighted, making me feel that this version was more a drama than a comedy.

With a strong cast who understood the play, and with good diction and voice production, this play raced along to a powerful, almost disturbing, end, when Kate publicly announces her total submission to Petruchio. Impressive performances from Kath Noonan as Grumia, Ellen Roe as Bianca, Emesha Rudolf as Lucentia, Sam de Zoete as Hortensio and Marcus Johnson as Tranio were part of this strong ensemble cast. Pacy, competent and surprising, this was a highlight of the year.