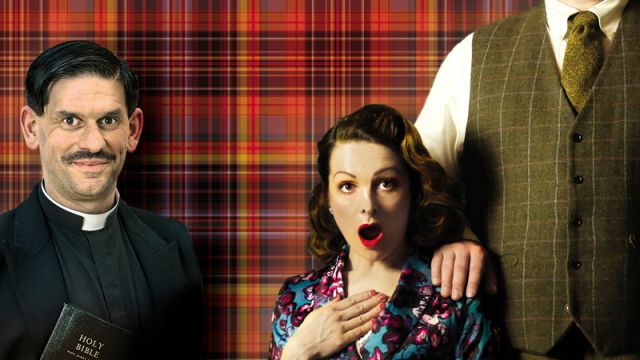 Moliere’s Tartuffe (or The Hypocrite) was first performed in Paris in 1664 and was one of Moliere’s most successful as well as controversial plays. Subsequently, it is now regarded as one of the greatest ‘classical’ comedies with a relatively constant performance history throughout the world over the past four hundred-odd years.

This hour long adaptation by Liz Lochead, one of Scotland’s premiere contemporary playwrights is an absolute delight. The play has been updated, the action taking place in a living room of a middle-class Scottish family in the 1940s. The number of characters has been radically reduced with only four of the main characters appearing on stage – Dorine, the maid (Joyce Falconer), Orgon, the master of the house (Grant O’Rouke), Elmire, his wife (Nicola Roy), and Tartuffe (Andy Clarke). The other characters from the play are heard off-stage but never seen.

As introduced by Dorine the maid, this household is in a state of chaos. Orgon, the master, has brought into his home Tartuffe, a seeming pious and religious puritan. However, Dorine as well as the mistress of the house, Elmire, know that Tartuffe is a complete fake. Things have now come to a head as Orgon has promised Tartuffe his daughter’s hand in marriage. Dorine and Elmire resolve to expose Tartuffe to Orgon, and they do this in one of the most hilarious scenes in all classical comedy.

This wonderful adaption and production is faithful to Moliere’s original intention – the exposing of hypocrites, or more precisely ‘a wolf in sheep’s clothing’. What makes this production even more appealing is that it is done in rhyming couplets and in a thick Scottish brogue (with ‘surtitles for non-fluent Scots out there’). It is simply hilarious and constant giggling by the audience was heard though-out the entire show.

All four actors from the UK are terrific as well as charming and disarming in this absurd comic world. Full credit, however, goes to Andy Clarke’s Tartuffe, one of the best I have ever seen. Often Tartuffe, one of the classical theatre’s most brilliant and challenging roles, is played as a non-sexual, non-masculine, and non-threatening villain. Andy Clarke’s Tartuffe, however, is very sexual, very masculine and very threatening, as well as very funny. Wonderful.

Directed with fast paced precision and accuracy by Tony Cownie this UK production is a brilliant addition of this year’s Adelaide Fringe Festival and is highly recommended.