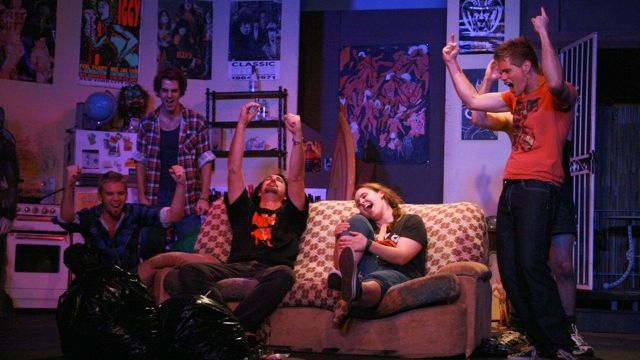 BAT, in mid-2009, began to change their house style from safe, conservative comedies and murder mysteries, to plays with bite.
So far this year they are way ahead on play choices and artistic standards, with tentative public acceptance. Last year’s surprise success He Died with a Felafel in his Hand added a new client support area, the Gen X and Y alternative lifestylers. So the theatre sought John Bermingham’s permission to present a premiere of his sequel, The Tasmanian Babes Fiasco. Playwright Simon Bedak was delighted to again handle the adaptation.
This looks like being another cult success, but be warned: It is not theatre for the conservative, nor for children.
The story in brief: The denizens of the Taringa house have been burgled and fallen seriously behind in their rent. A developer wants to bulldoze the house and erect a residential high-rise on the block. That suits the owner, who sends in a bevy of boisterous lesbians to oust the students, layabouts and larrikins. But they have a lease and legal protection, except where the rent arrears are concerned …
Director Natalie Bochenski, with her cast of thirteen reprobates, creates a series of grotesque episodes with the author (Shaun King) and den-mother (Amy Currie) at the helm. Richard Hunt’s grotty, heavily graffiti’d set is suitably repulsive; the language ranges from offensive to obscene; there’s sex and drugs – in fact, everything anti-establishment.
For me, the high points were the entertaining hallucinatory dance sequences juxtaposed against the dark humour of the plot.
Jay McKee