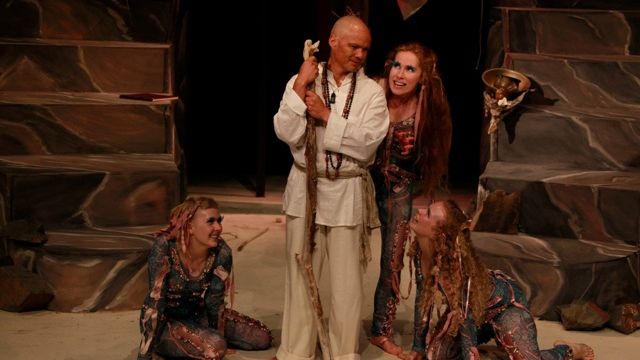 By William Shakespeare. Young People’s Theatre, at its Hamilton Theatre, Newcastle. February 6 to 23, 2013.

THE Tempest is one of Shakespeare’s most magical plays, smoothly combining comedy, drama, romance and fantasy. And director Mat Lee, the actors and production team made it engaging entertainment.

After opening with a ship’s passengers and crew fighting a ferocious storm, with unearthly creatures they cannot see managing the chaos, the scene shifted to a cave on a nearby island where a quietly spoken man explained to his teenage daughter how he used magic to create the storm and bring ashore the sibling and a conspirator who unseated him as duke of Milan, then cast him and the infant girl adrift in a leaking boat.

The betrayed duke, Prospero, tells daughter Miranda that all on the ship will be safe. But as they come ashore at different places it becomes clear that Prospero is using the magic he has learnt in his exile to help end the mental tempest imposed upon him. 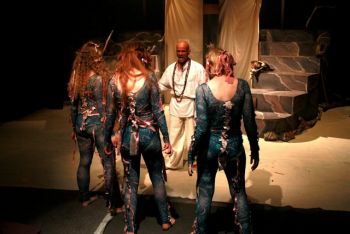 Lee gave the play a substantially contemporary setting, helping to validate his decision to change the sex of Prospero’s treacherous sibling to a woman, Antonia. He also had three actors as Prospero’s mischievous sprite, Ariel, a choice which put the character physically everywhere on occasions, unsettling schemers through words and actions.

Dez Robertson was a regal Prospero, someone who had learnt through his errors, while

Andrea Bain, Phoebe Clark and Tegan Gow worked well together as the sprightly Ariel, wearing identical costumes that suggested a blending of air, sea and land.

The costume designers also added to the ill-ease created by Luke Jarvis as Caliban, the half-human, half-devil monster enslaved by Prospero after he tried to rape Miranda. Jarvis’s Caliban, wearing a leatherish jacket with spikes along the back, was unnervingly funny but increasingly sympathetic as he plotted to kill Prospero.