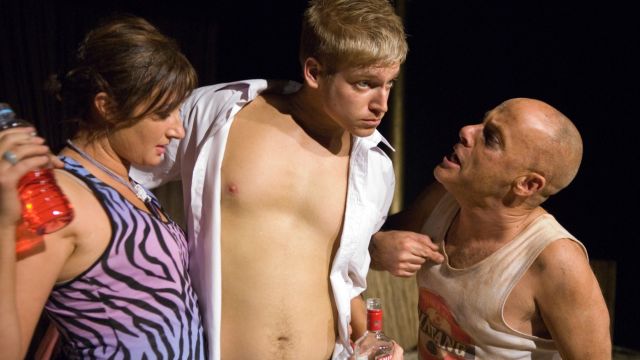 The opening to this version of Tempest takes place before the first flash of strobe lighting and long-delayed crack of thunder. Director Sally Putnam visited Bali last year and her travels got her thinking about interpreting Tempest. The original was set somewhere in the 'New World'. Why not make that new world look a lot like Bali?
A shipwrecked mixed bag of royals, schemers and hangers-on are pushed and prodded by the mysterious, almost-omniscient Prospero (Peter Davies). This updated Prospero runs the best nightclub on the island, spying on everyone with modern technology and crafting moods with his skill in light and sound.
Today's audiences will find the first half overloaded with entrances–as grand as many of them are. Notable among these are: Ferdinand (Oliver de Rohan) and Stephano (Todd Clappis) with his gaggle of girls, Trinny (Bronwyn Ruciak) and Suzanna (Nicole Rutty). The most outstanding entrance, however, is Dave Simms as Caliban (although this is no surprise to those who have seen him perform before, eg as Hector in The History Boys).
It's ambitious to update Shakespeare. You face the ire of the traditionalists–and the impatience of audiences used to having the central conflicts revealed quickly so the time can be spent resolving them. You'll enjoy the show more if you read a program and before the theatre doors open.
Daniel G. Taylor