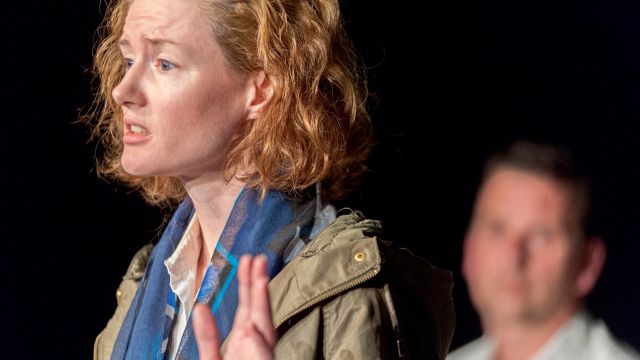 A show for the dark-humoured who appreciate quality writing and acting, with a generous splash of violence and a dash of the supernatural.

We join two lonely women and a homicidal maniac on a drama-filled night, venturing from light to darkness, ordinary to fantasy, as they push their limits and make deals with the devil.

We get to know each character intimately, although their names are never revealed. Through a series of monologues, we discover their rationalisation of their actions and eventually how their paths are intertwined.

O’Rowe’s rhythmical dialogue is so vivid, facial expressions and minimal physical movement are sufficient for the audience to visualise what’s happening. We’re transported to the streets of Dublin; you can almost feel the crisp air as night falls and dawn eventually rises again. Actors Emma Louise Pursey, Scott Major and Sarah Clarke show mastery of their craft, drawing on deep empathy with their characters. They deliver the challenging prose and Irish drawl with confidence.

Captivating until the very last word, the show didn’t drag despite going for almost two hours with no interval. I sat on the edge of my seat as the plot twisted and unveiled its mysteries. The characters mesmerised me with their vivid tales, surprising me with funny and shocking moments throughout the narrative.

The theatre, above the pub at North Melbourne’s Courthouse Hotel, is a suitable setting for the show. Much of the play takes place in pubs so it helps the audience relate to the characters. Sound effects and lighting enhance the storytelling.

Melbourne offers audiences many opportunities to see brilliant productions and performers and Terminus is no exception. A strong start to theatre company North of Eight’s inaugural season delivering on their dedication to “the disciplined craft of storytelling”.