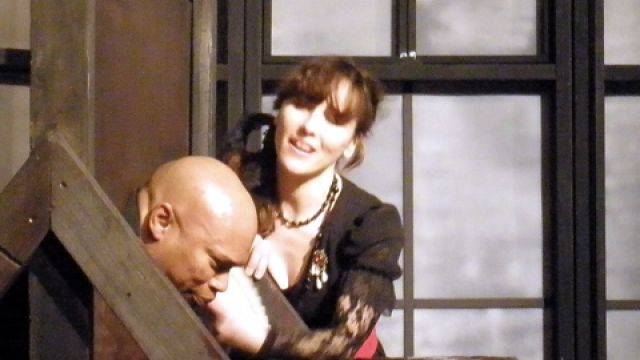 Blood - the title and graphic publicity images promised it – but a single slit throat and a bloodied nose does not a theatre saturate.
The show’s producer and linking narrator Steven Hopley raised expectations further, making much ado of issuing plastic raincoats to the front row of the audience – no need – no jugular gusher.
Theatre of Blood (a misnomer for now), is a new late Friday night production. Based on the macabre French theatre genre Grand-Guignol, it is comprised of three short plays – a thriller, At the Telephone; a dark comedy, The Guillotine, and the supposed blood-spiller, Orgy in the Lighthouse.
Opening to coincide with Halloween weekend, perhaps the production had been rushed on. Cramped for space on a newly-constructed stage in the foyer of the Newtown Theatre, the actors were apparently in need of more rehearsal time within the tight space constraints, often seemingly impeded by (limited) furniture.
No blood was required in the first two plays.
At the Telephone by André de Lporde and Charles Foley is a thriller in the Hitchcock mold, with the horrendous act (the murder of a young married woman and her infant) taking place off-stage, while her husband hears the horrific events via the telephone from a distance of 70 miles. Directed by Liane Norman, the production was focused and appropriately chilling.
The Guillotine, a dark comedy by Eugène Héros and Léon Abric, involving a fetish for sex in dangerous situations, was generally very well timed, with genuinely dark wit. Stephen Carnell’s production flowed most smoothly of the three short plays.
Orgy in the Lighthouse by Alfred Marchand should have been the most chilling, and provided the anticipated blood torrents. Steven Hopley’s production was the disappointment of the night in several ways. Sexually charged moments lacked convictionin a timid orgy, and, overall, Hopley’s direction felt the least decisive of the evening. Where the night should have peaked, Theatre of Blood stumbled – in both dramatic and effects departments. A better blood pump would be the minimum ask for week two of the season.
Designer Anna Gardiner’s versatile, attractive set served the diverse needs of all three plays well. A committed acting ensemble launched enthusiastically into all three pieces. There is much more to like than dislike about this clever idea, which has late night cult potential as it runs itself in.
More on-set rehearsal time, more blood, and less furniture, please.