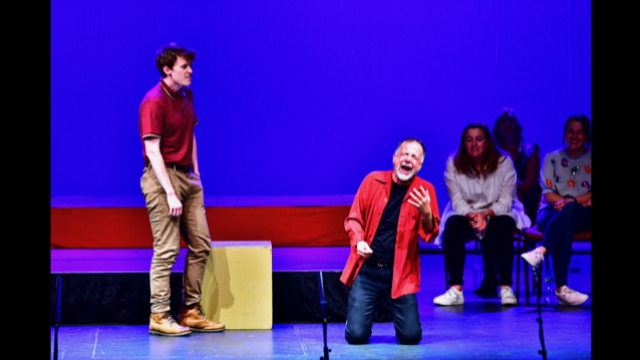 What a treat! The beautifully renovated Enmore Theatre with its custom-designed, monogrammed carpet, all clean and ‘unsticky’, the art deco reliefs all newly painted and picked out in gold - and sixteen improvisation  “All Stars”  introduced and compered by none other than Mr Mathematics, Adam Spencer, himself another Theatresports All Star! What more could one wish for!

Well, a great night of improvised theatre for one thing. And that’s what we got!

A wonderful supportive audience for another thing. We got that too!

There’s something about Theatresports audiences. They’re inter-generational for a start - old, young and every age bracket in between. They’re multicultural, multigender, multi-everything. There are families, groups of schoolkids, Drama teachers, theatre buffs, Theatre sports buffs - and people who heard about the show on the ABC! (Your ABC interviews and little ‘radio impro with cow’ last Thursday night really worked guys!) And to the credit of every one of the actors, the whole performance is family friendly! I’m no prude by any means, but a whole improvised performance with no gratuitous swearing – in fact no swearing at all! - and no smutty innuendoes despite plenty of opportunities in fourteen imaginative and clever scenes? That’s got to be something unusual.

In fact, the whole performance was clean, clever, pacey and theatrical. Every improv ‘rule’ was followed! Offers were made, accepted and extended. New characters were introduced. No idea was ‘blocked’. Yes, I know I’m using ‘jargon’, but every Drama student and Drama teacher in the audience will know what I mean!

They will also appreciate the fact that, despite their experience and talent, these Theatresports Stars performed some of the original one, two and three minute Theatresports games devised by Keith Johnson and his students in Calgary, Canada in the 1970s. ‘Death in a Minute’, the ‘Alphabet game’, ‘Emotional Replay’, ‘Double Figures’ are still basic games used to develop the inter-school Theatresports Competition teams that prepare Drama students for the rigours of the drama syllabuses. All in all, as usual, this was a great night of improvised theatre performed by some of the best known Impro actors in the country - and organised by a team of similarly skilled actors who are the creative, collaborative team that is Impro Australia.

Want to understand and learn more about Theatresports? Want to see more?  There are plenty of opportunities. Just go to improaustralia.com and check out classes and performances – like that on the first Monday of every month at the Cat and Fiddle Hotel in Balmain. And check out the other performances like Celebrity Theatresports coming up later in the year. You’ll be surprised just how popular imrovisation is – and how much fun.