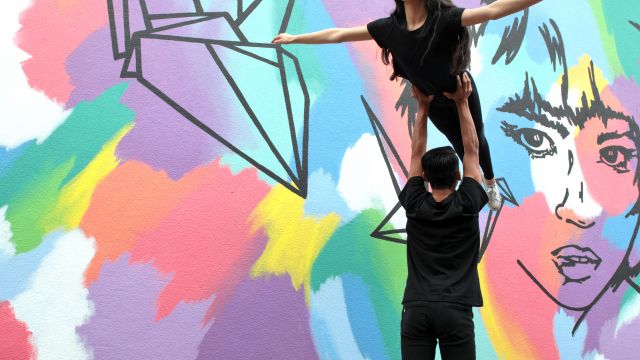 Kathryn Shultz Miller’s A Thousand Cranes by Adelaide’s ‘cross-art form’ company The Gemini Collective is based on the internationally acclaimed children’s novel Sadako and the Thousand Paper Cranes by Canadian-American author Eleanor Coerr.

Set in post-WW2 Japan it is loosely based on the true story of Sadako Sasaki, whose statue holding a golden crane stands in the Hiroshima Peace Memorial Park in modern-day Japan.

Why one thousand cranes? Because if you make that many paper cranes the ancestors, and/or Gods, will grant you a wish. For 12-years-old Sadako, survivor of the Hiroshima atomic bomb 6 August 1945 when she was 2 years old, this wish is for a cure for the terminal leukemia that is slowly killing her due to the radiation from the atomic bomb.

Sadako Sasaki may represent innocent victims of nuclear warfare, but she has also come to represent the hopes and dreams of millions of children throughout the modern world. Every day thousands of paper crane arrive to be placed on her statue from children around the world. Sadako Sasaki’s ‘Thousand Cranes’ stands as a symbol, a vital symbol of Hope.

The new musical version of Sadako Sasaki’s story is a truly marvelous. This is mainly due to its poignancy, as well as its elegant, sophisticated and imaginative realization in this production, as envisaged by Sarah Williams (Director/Choreographer), Anthony Butler (co-Director/Designer) and Jennifer Trijo (Musical Director/Composer). Plus, there is a truly exceptional Adelaide cast lead by child actors Maddy Flapper (Sadako), Calin Diamond (Kenji), with Iman Saleh (Father), Jess Goc-Ong (Mother/Obachan), as well as ‘on-stage swing’ Arwen Diamond.

Without exception they all give terrific performances, bringing to life this deeply moving tale about death and hope. It is without doubt, for me, the strongest and most consistent and uniformly most powerful ensemble of community actors that I have recently seen in Adelaide.

High praise indeed, but completely deserved. This is primarily due the various creative and expressive dynamics employed in telling this tale. This includes acting, singing, dancing, playing instruments, working as stage-crew, as well as heart-stopping aerial gymnastics by Maddy Flapper.