Three In The Bed 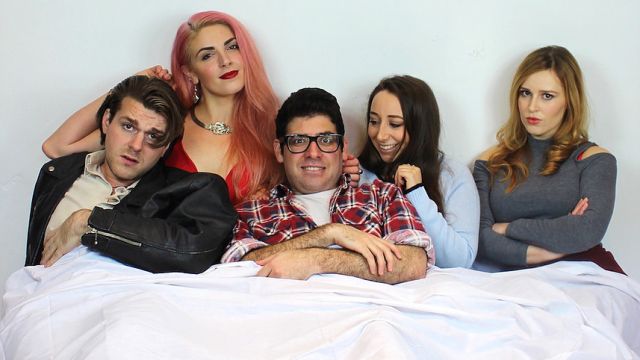 Fans of Group Sex rejoice! The genre that is musical theatre has now added your thing to its thing – and a very welcome thing your thing is. Just when I thought musicals were going to disappear into pretentious self-drear, along comes a show that wakes us up and reminds us that there will always be a need for Rocky Horror.

It’s a fun show, though it depends on your idea of “fun”. If you enjoy films like 40-Year-Old Virgin and Sausage Party then this is the show for you.

But under the ribald surface is heart and intelligence, and all the songs are full of sharp wit and pathos. I particularly liked the trio quodlibet in the first half, and “Flattered” was my emotional highpoint. 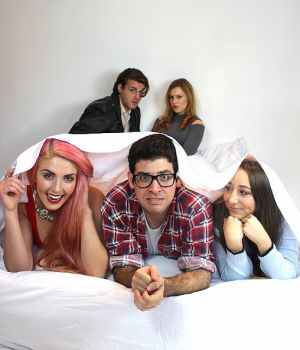 A lot of this show’s appeal lies in Jonathon Holmes’s script and songs (with a name like that you’re destined to write a musical about sex). He wears his composer influences on his sleeve but in a good way – it’s still his own material and it sounds fresh. Example: one of the songs recalls ‘Your Fault’from Into the Woods but it doesn’t sound like a lesser talent doing a hack job on Sondheim. Holmes also has a knack of knowing when to bring back motifs and melodies heard earlier for maximum impact. It’ s all helped by the tight and soulful playing of MD Natalya Aynsley’s three-piece band, hidden backstage.

The other factor making this show work is the great cast. Aaron Robuck, Alicia Rose Quinn, Daniella Mirels, Adin Milostnik and Laura Murphy are all equally brilliant, in voice, timing, and acting. It’s possible with a show like this to easily hate or not care for the characters, but the way these actors play them makes the characters endearing and brings out the fifty shades of grey (sorry, couldn’t resist) found in the script.

The only criticism I have deals with the SOUND. Putting mics on all the cast was overkill in that small-ish venue and seemed pointless, as often the band still drowned them out and the cast fought constant feedback. Lots of times I missed many of the lyrics due to the sound (though what I heard was great!). I’m not sure why there was amplification in the first place. I co-produced Songs for a New World in that venue with the same band line up and on stage; none of our cast were mic’d and everyone heard everything crystal clear. I’d say ditch the mics and just turn the band down a notch: this isn’t Acer Arena.

Hopefully that’s all been fixed, and the cast can sing about their wet spots with no fear of feedback.