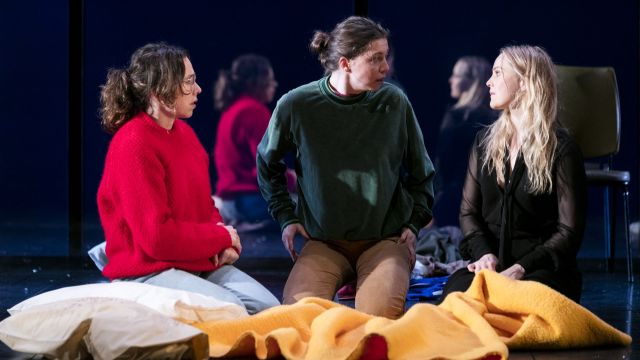 There is much that is familiar about Andrew Upton’s reworking of Three Sisters at The Drama Theatre, and much that is profoundly strange. There are the sisters alright — Olga Prozorov, at 28 the eldest, a provincial school teacher; Masha, short tempered, disappointed in marriage; Irina, youngest and desperate to return to Moscow and taste true freedom. But the time is Now, or thereabouts, not the 19th century. Duels can no longer be picked and fought. The town’s garrison doesn’t march out of town to a jaunty band. They leave to the deafening rumble of jet planes, which is definitely more telling.

Upton’s version, directed to the hilt by Kip Williams, perfectly captures the Prozorov sisters’ yearning for escape and Chekhov’s portrait of the need for endurance in the face of dashed hopes. Alison Bell as the ever-enduring Olga, Eryn Jean Norvill as the wide-eyed, black-clad, potty-mouthed Masha, and Miranda Daughtry as the always-about-to-be-crushed Irina are vividly aligned.

Also on hand is Brandon McClelland as Andrei, their tubby brother, and his ring-in wife Natasha, played by Nikki Shiels, whose shiny jeans and two new babies deliver big trouble to the sisters. 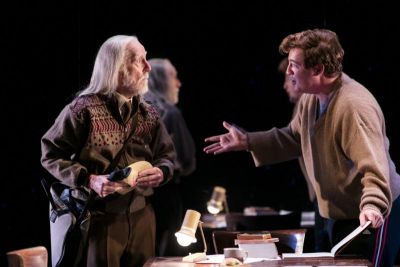 Peter Carroll is brilliant as the deaf-as-a-post local mailman. Mark Leonard Winter shows how hopelessly divided in love a man can be. With 14 speaking roles and a total length of three-hours-and-a-quarter, this is a big production even for the Sydney Theatre Company.

The setting by Alice Babidge is controversial. 13 panels start as a mirrored wall, reflecting the audience, before they are lit as part of the house, or to spectacularly show snow falling in the garden outside. For the last scene they, and everything else, rise into the flies, leaving a bleak, open Godot-like landscape.

The soundscape is also bleak. Constant noises (composed by The Sweats) accompany the action, and can be heard even during the interval, a new thing.