Thrill Me – The Leopold and Loeb Story by Stephen Dolginoff. 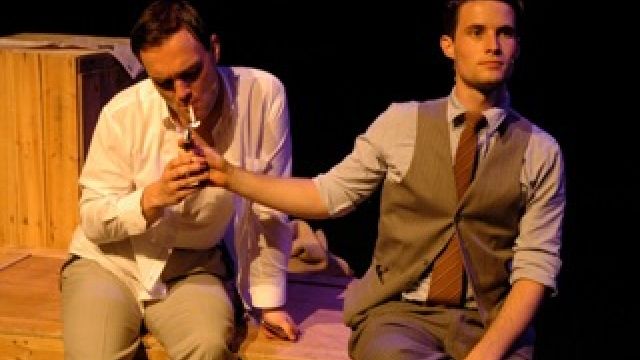 There’s a psychological chiller of a musical playing at the Seymour Centre.

It makes mega-musical Wicked, playing down the road, look like a cheery story about a misunderstood green girl.

If that one’s Wicked, then what is Thrill Me - The Leopold and Loeb Story? Malicious? Malevolent? Despicable?

The minimalist production differs in so many ways from the mega musical. It has simple scenery, costumes, and single piano accompaniment. Large timber packing crates and a handful of props create all the play’s locations. It’s small scale and Off-Broadway.

Thrill Me is an unlikely idea for musicalisation; the co-dependent relationship a pair of real life thrill-killers. They are gay lovers, both wealthy, extremely intelligent law students, with Nietzche inspired superiority fantasies. Their aspiration, to commit the perfect crime, escalates from minor crimes to the calculated kidnap and murder of a random selected child.

Some dramatic license has been taken with known facts. This creates the relationship’s tension, the piece’s dynamic and a double meaning in the title.

In this telling one character is the controlling dominant partner / thrill killer. The other is submissive, seeking love and sexual ‘thrills’ in reward for acting as accomplice. History is less specific. There’s quite a twist, too, in relationship dynamic late in the piece.

The story of Thrill Me is familiar. It inspired both the 1929 play and the Hitchcock film Rope, along with more recent books and films including Swoon, and the odd Law and Order episode.

Here the Leopold and Loeb Story in Thrill Me is told in flashback. It is framed by a hearing, 35 years later, before an unseen parole board, with surviving conspirator Nathan Leopold seeking release. The audience is distanced from the action, in Epic theatre style, and moral questions posed.

Thrill Me - The Leopold and Loeb Story recounts a horrific true story. The strength of the evening is the absolute truth and the belief the two performers, Blake Erickson and Benjamin Giraud, bring to their portrayals.

There’s no gratuitous is titillation, the murder isn’t enacted, and the sexual is quickly cut short. Thrill Me does capture the abduction in a chilling monologue, but the focus throughout is the co-dependent relationship.

Sadly, a lighting convention used to distinguish between the two time periods of the play is applied inconsistently. The older Leopold’s face is generally obscured by the use of back-light during the parole scenes. This masks the extreme youth of the actor. Unfortunately lapses in staging and execution spoil the impact of this effect.

Relative newcomers to producing musical theatre, Squabbologic are to be congratulated on broadening their scope from previously lighter work, and bringing Sydney its first viewing of this work.

This isn’t a musical for all tastes! Rodgers and Hammerstein it ain’t! Still, there is something quite compelling about this dark, salutary musical.