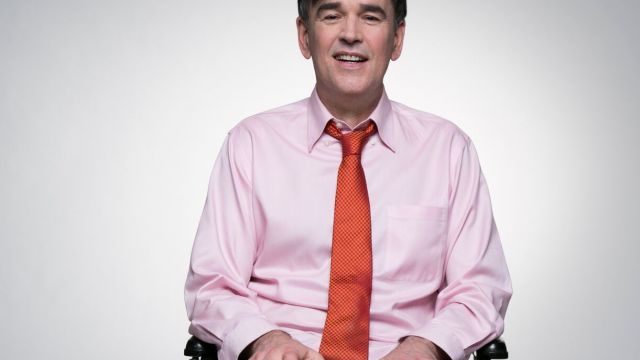 Having followed the exploits of Tim Ferguson for many years it was my pleasure to assist backstage fifteen years ago on an Adelaide performance of Joseph and the Amazing Technicolour Dreamcoat in which Tim vivaciously played ‘Pharaoh’. As this was an MS Society fundraiser, I pondered at the time, why he had chosen to take this role. It soon became very evident as we learned that he had been affected by this insidious disability.

This man is a powerhouse of wit, joy and inspiration. Whilst it is obvious his MS has progressed unfairly to a stage where he is quite debilitated and wheelchair bound, this does not affect in any way the irreverent, anarchic humour that we have grown to know and love.  His Fringe show Tim Ferguson- a Fast Life on Wheels finds us peeling the layers off his life. He is a consummate storyteller and we find out throughout the show that there is so much more to this man than just his sense of (very) self- deprecating humour.

Utilising screen projections to tell his story, Tim shows us where his love of seditious revolution was born. His father, Tony, was a war correspondent and then worked for the ABC on Today Tonight and Four Corners. A ground-breaking journalist- he discussed issues that were “not the norm” and one in particular about a lesbian marriage resulted in him getting the sack in 1971. This then resulted ultimately in Tim’s family living in Canberra where he met up with Richard Fidler and Paul Mc Dermott and Doug Anthony All Stars was born.

From here we wander through Tim’s life, travelling the world with The Allstars and suffering the first onset symptoms of MS. Early on Tim ignored these and continued to work. Eventually they resulted in him leaving DAAS, but then going on to work on the hilarious ‘Don’t Forget your Toothbrush’. As his life began to change with more and more serious symptoms, he confessed on ‘Good News Week’ to all, that this was what was happening in his life. Tim went on to work for Channel 9, developing some pilots for comedy shows- none of which really flew and then on to become a producer of the show Shock Jock and film Spin Out. Today, Tim has written two books and works as a teacher of narrative comedy all over the world.

This show is funny and poignant. His attacks on millennials, baldness and many politicians are a riot and all throughout his storytelling we are treated to his wickedly seditious sense of humour. We also find ourselves moved by his plight- a video documentary of his life on tour with DAAS and severe MS symptoms reduced this reviewer to tears. I had no idea this disability is so cruel and Tim himself confessed he is in constant pain.

Tim Ferguson tells us at opening that as a small boy he wanted to fly and tried, crashing to the ground. This wonderful man continues to fly, having crashed many times. Nothing passes Tim Ferguson by, despite his current somewhat restricted circumstances.