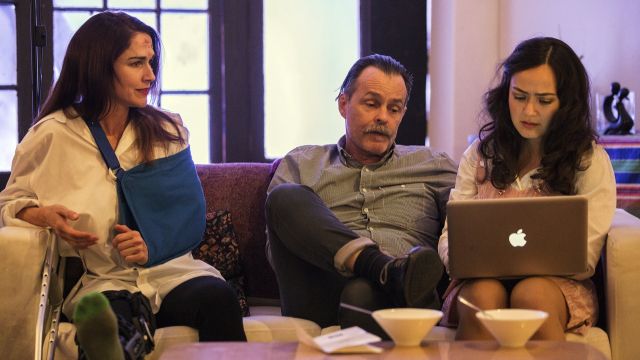 Donald Margulies writes for “moral-thinking people”. When asked about Time Stands Still, he said it was “a way to write about what is going on in the world … what people are talking about.” He does so, according to director Claudia Barrie without offering any real answers to the questions he raises. Rather, “the bigger morality issues are left hanging in the air for us to … discuss long after the performance.”

Setting the play in the narrow Tap Gallery, with the audience incredibly close to the action, Barrie, and designer Amy Bradshaw, make those issues, and the characters who face them, even more confronting. We sit right next to them as their lives unfold. We are personally involved in their intimate moments, sharing the tension, feeling the pressure, watching, sometimes almost too closely, the anguish and apprehension in their eyes.

Which all means that the production has to be tight, the blocking compact, the actors secure in their characters – and their lines. Barrie gives them no leeway. Every movement, every reaction is carefully considered and rehearsed in relation to the restrictions of the space, the proximity of the audience, and the complexity and subtlety of the relationships. 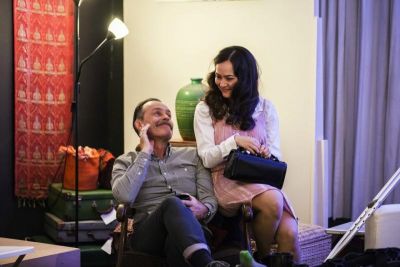 Sarah is a photographic journalist committed to ‘making a difference’ by using her camera to bring the atrocities of war and disaster to the attention of the world. James, her partner of eight years, is a journalist who writes about them. He is recovering from a breakdown following one of those disasters. She is recovering from near-death injuries after a bomb attack. The play begins as he brings her home to convalesce – and, he hopes, to reconsider …

Her leg braced, one arm manipulating a crutch, the other in a sling, her face a mass of scars and stitches, Emily J Stewart, as Sarah, epitomises the mental strength and physical resilience of the woman she portrays. Stewart establishes Sarah’s independence in taut reactions and tight pauses that emphasise the tension in the dialogue – and give depth and complexity to the character. This is a woman who sees beyond the minutiae, but has, perhaps, become almost fanatical.

James, played by Matt Minto, has been shattered – and sobered – by their latest experiences. With Sarah alive and safely home, he is beginning to reassess the instability of their situation. Minto creates a James who is strong, intelligent and understanding but still vulnerable. We are close enough to read that vulnerability in strained expressions and silent moments that stretch tightly. 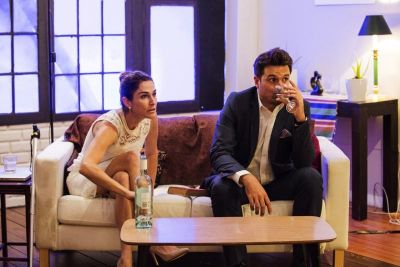 The tension is relaxed in the scenes with their long time friend and editor, Richard, played by Terry Serio. Serio’s Richard is hale and self-assured, confident enough to be able to take criticism in his stride – and give it in return. He, and his new and much younger girlfriend, Mandy, played with charming naivety by Laura Djanegara, introduce the humour that Margulies uses to release the pressure in the play.

Locked in by such a small and unconventional space, these four actors bring Margulies’ complex characters and their moral conflicts into close, stark reality. Working in such a confined space is never easy. Working with the audience in the chair beside you is harder still. It is a difficult call Barrie and Freeman have made, but this strong, committed cast manages to make the characters and the situation even more natural and compelling than in a conventional theatre space.