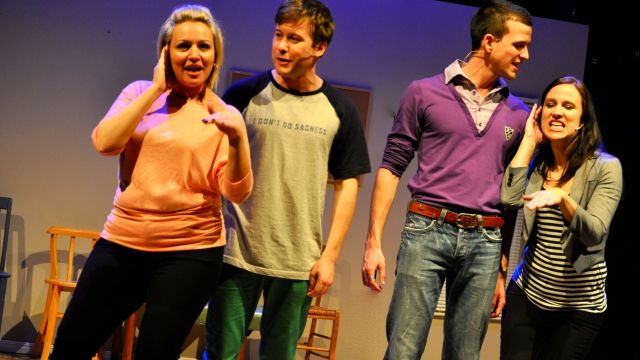 Oscar Theatre Company, Emily Gilhome’s enterprising young company who have brought Brisbane audiences The Last Five Years, A Slightly Sondheim Wedding, and the 2008 Qld Matilda Winner, The 25th Annual Putnam County Spelling Bee, have turned to another quirky Broadway show with [title of show], as their latest offering. It’s another in a group of small musicals, The Musical of Musicals etc., that takes the mickey out of the musical theatre genre and the joke very quickly wears thin. Its story, of two guys writing a musical about two guys writing a musical in three weeks for the New York Music Theatre Festival, and its subsequent success both Off-Broadway and on, is loosely based on fact. There are lots of Broadway in-jokes, and for musical theatre tragics it’s a hoot, but if you’re not, then a lot of references will pass over your head unless you’ve read the program [tos]sary list of expressions used in the play. The cast; Kynan Francis (Jeff), Dash Kruck (Hunter), Bernadette Alizart (Heidi) and Liz Buchanan Susan), and their accompanist Luke Volker (Larry 2) all work hard, but at times were defeated by poor sound. It’s all very sophomoric and not nearly witty enough but, the young audience embraced it with enthusiasm and gave it a rousing reception equivalent to a football Grand Final win.
Peter Pinne