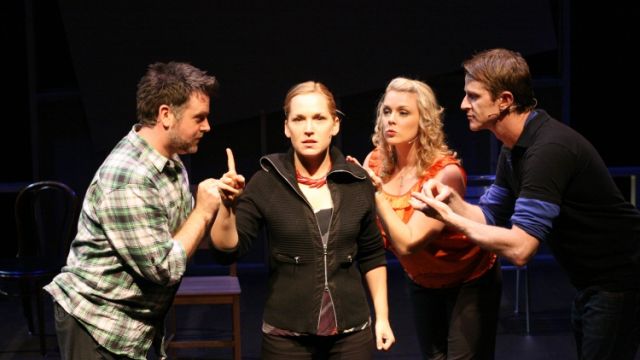 Music and lyrics by Jeff Bowen and a book by Hunter Bell. Magnormos. Theatre Works, St Kilda. May 4 to 15. Return Season Aug 26 to Sept 11.

Magnormos could only have found a better Hunter and Jeff (Michael Lindner and David Spencer) if they had somehow extradited the real Hunter Bell and Jeff Bowen to play themselves. I can’t believe I’ve never seen Lara Thew (Heidi) before and was blown away by her performance. I’ve also never experienced Laura Fitzpatrick tackling a role like Susan before, and her dry-ice sense of humour and timing were hilariously brilliant. It’s a fantastic cast with a vibrant energy you can’t afford to miss.

Theatre people, you need to see this show. It may only have a cast of four and one keyboard, but it’s the most honest, thought-provoking musical you’ll see all year. For those searching for inspiration, there’s “An Original Musical,” for those with self-doubt “Die Vampire Die.” The show is highly genre-referential, meta-theatrical and deconstructive, and has a strong understanding of the language of theatre technology. [tos] is an exercise in unbridled ambition, and the genre needs more Hunter Bells and Jeff Bowens.

The only disappointment about last night’s show was that these stellar performers were working to half a house. The show in [tos] sells out, and it’s a pity the real show isn’t doing the same. It may not be flashy, it may not be expensive, but boy is it exciting.

Apologies to anyone looking for our ticket giveaway. We had our lucky winners within a minute.