As Told By The Boys Who Fed Me Apples 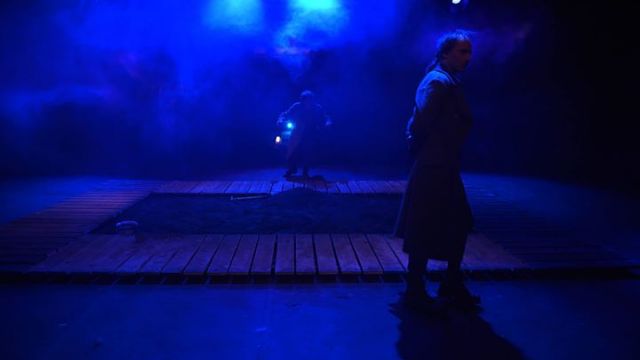 This is a sensational show in all its aspects. The text is beautifully written and is rich with the historical details of the horrors of serving as a light-horseman. All the pathos of the incredible strength of the bond between humans and animals is fully explored in this piece. The play tells the story of the misadventures of the only surviving Australian light horse from WWI, Sandy. The extremely evocative set captures the dangers and the mystique of the battlefield effectively with a realism that has cinematic quality. The lighting and staging techniques are simple, yet striking.

This beautifully designed set housed two amazing and unusual performances. The artistry of the mime performance provided by Miklos Gerely (Sandy) was visibly moving. He captured the spirit of Sandy with such intensity and delicacy is was simply a pleasure to watch. The performance in the extremely demanding role played by André Jewson (Soldier) was nothing short of an astonishing tour de force. Jewson’s versatility is exquisitely demonstrated in the range of emotions he displayed and the physical feats he performed.

The action and movement is frequently highly stylised and resembles many of the iconic war images memorialised in statues and archival photographs and film footage. This enhanced the already highly aesthetic approach adopted in this production and produced a performance that is both remarkable and deeply moving.