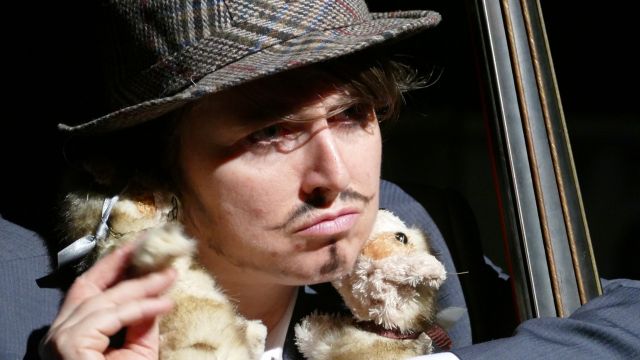 This show is an extraordinary gleeful exploration of some dark political events that besieged Eastern European countries under communist regimes. This light-hearted approach does not belittle the issues but allows the audience to see how suspicion and paranoia pervaded all aspects of life in countries like Romania. In this show the formation of a Romanian folkloristic music ensemble becomes fraught with obstacles fuelled by political machinations and corrupt bureaucracies. The characters are always having to second guess the motives of others and navigate unforgiving and uncooperative state systems.

Brad Spiro (Sasha Čuha) is a naïve American music student who catapults himself into this web of intrigue in his pursuit to learn from some talented local musicians. He tracks down violinist, Ionel Stoican (Alana Hunt), whose ambition it is to form a group and record music with the reluctant contrabassist, Tony Covaci (Kirri Büchle), and accordionist, Nicu Valentinu (Sofia Chapman). This results in Brad being interrogated by the secret police and the unravelling of Ionel’s scheming efforts to achieve his goals. These events are delivered in a delightful absurdist style where characters happily sing and dance while playing their instruments. This creates a wonderful tongue-in-cheek tone that is consistently adopted by all the performers, but each in their own unique and quirky manner. The stylised acting is also well supported by a simple set which also employs a large screen which acts as a backdrop. The artwork for these visuals, as well as the set, is very artisanal and creates a very rustic and austere atmosphere. This is a highly energetic and lively production that is full of unexpected and enchanting moments.