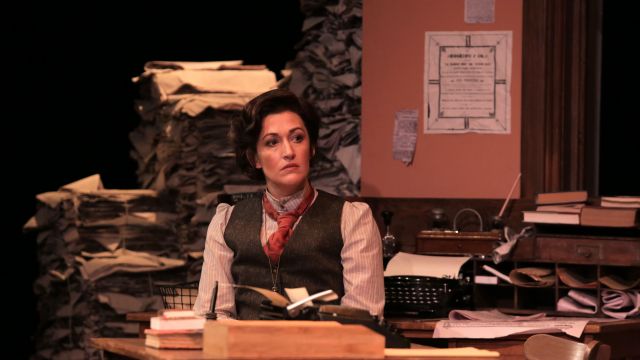 Opening Night of The Torrents started with an address to the audience from a casually dressed Celia Pacquola, talking briefly about the show, and very naturally sharing a touch of her comic talents. It was a lovely surprise, and a great way to introduce this little known show.

In 1955, two new plays were joint winners of a prestigious playwriting award. One, Summer of the 17th Doll, became one of the best known, frequently performed and most often studied Australian play. The Torrents, on the other hand, has had only one professional production, before this joint Black Swan and Sydney Theatre Company production, a 1996 production in Adelaide. It is surprising, given that this is an interesting and well-structured play, that there has been so little interest in producing it. 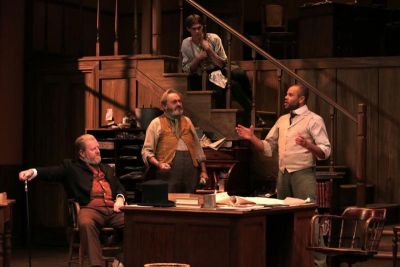 Set in a newspaper office in an Australian gold mining town in the late 1890s, it bears more than a passing resemblance to Kalgoorlie and its Western Argus news. The new reporter J. G. Milford arrives, and to most people’s surprise, is a woman, and a young business man has a dream to irrigate the outback.

The Torrents are a father and son editor and reporter, with Tony Cogin very strong as the seemingly traditional man in charge, and Gareth Davies showing depth as his son, living in the shadow. Luke Carroll was convincing as likeable dreamer Kingsley, with Steve Rodgers bringing appropriate bluster and swagger to the paper’s financier John Manson.

Celia Pacquola is outstanding as Jenny Milford, and like her character is very, very good at her job. Emily Rose Brennan is a delightful contrast in the only other female role, the traditionally feminine Gwynne - and shows a lovely journey. 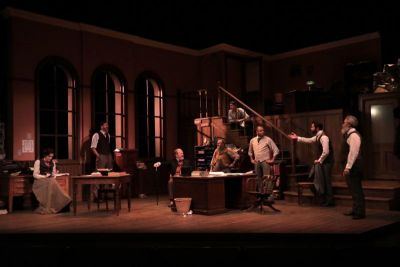 Great teamwork from the newspaper staff, Rob Johnson as young and earnest Bernie, Sam Longley bringing gentle comedy to Scotsman Jock McDonald and Geoff Kelso as the tall-tale telling Christy. Special mention should be made of Luzita Fereday’s accent and dialogue coaching, with many distinct accents blending beautifully.

Designer Renée Mulder paid homage to Oriel Gray’s original stage directions, said to be very thorough, and the multi-level set feels very of the time and location. The late Victorian costumes tell a great deal about each character and the attention to detail - especially the dust on shoes and hems - gives an excellent ring-of truth. Lucy Birkinshaw’s lighting design and Joe Paradise Lui’s sound and composition feel natural and appropriate.

We’re left with a sense of wonder as to why this little gem of an Australian play has been so overlooked for so long. An excellent production, well worth catching.

David Spicer adds some thoughts on the opening night at the Sydney Opera House.

The opening in Sydney had an added dimension - piles and piles of newspapers stacked up on either side of the stage. This harked back to the good old days where in newspapers everything often happened in one place, or as one of the characters stated they would "write it, set it, print it and sell it" from the company's headquarters.

It wasn't so long ago that this still occured, when I was a copyboy at the Sydney Morning Herald in the middle of the 80's you could feel the building move when the presses started rolling downstairs on the ground level. Nowadays with no need for actual presses - papers are invaribly printed in destinations far away from where the reporters work.

Written in 1955 this gentle comedy was ahead of its time. The issues raised about gender politics, mining versus sustainable environmental practises and how regional towns cope with changing fortunes make it relevant for today's audiences.

There are some quiet chuckles, rather than belly laughs from this production and a little was lost as it is difficult to hear all the dialogue from the very back of the theatre.

Runs at the Drama Theatre of the Sydney Opera House until August 24.