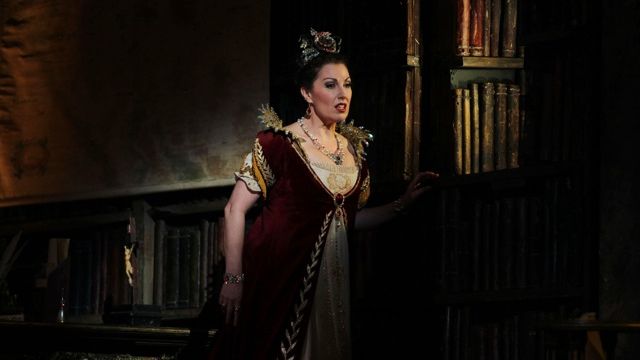 If you’re going to go out with a bang, it might as well be a big bang, and that’s what Chris Mangin’s swan-song as artistic director of Opera Queensland did with this magnificent production of Tosca.

Puccini’s glorious masterpiece couldn’t have been realized better – lavish sets, sumptuous costumes, and three principals, no virgins as far as these roles are concerned, having sung them internationally, who sang with passion and conviction. Cheryl Barker was every inch Tosca, fiery, seductive, and achingly beautiful in her ‘Vissi d’arte’ aria. Julian Gavin’s powerful tenor delivered some thrilling top notes as Cavaradossi, and Douglas McNichol as Scarpia, sang with masterly assurance giving probably the best performance of the night. The ever-reliable John Bolton Wood as Sacristan brought some much needed light relief to these somber proceedings. The Queensland Orchestra, under the baton of Nicholas Braithwaite, have rarely performed better.

It’s an old production, having been originated by John Copley at the Australian Opera back in 1981, with sets by Allan Lees and costumes by Michael Stennett, and re-staged here by Cathy Dadd. This is a very good example of when a production works, why change it?

Mangan’s tenancy at Opera Queensland has produced many fine productions, but this Tosca would undoubtedly be one of the best.