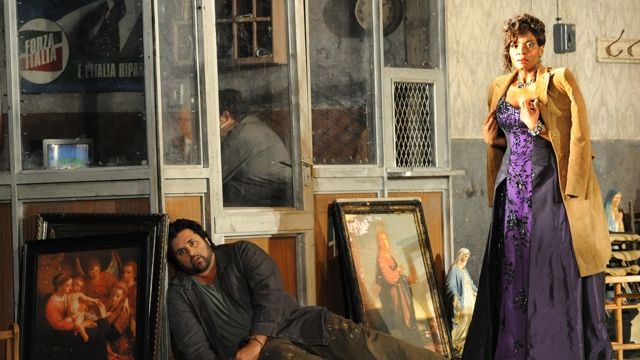 Reports suggest that internationally acclaimed Australian Tosca Cheryl Barker, the originally announced diva, and a late withdrawl, is among the dissenters.

Replacing Tosca’s spectacular suicide from a castle parapet with a single bullet from the revolver of a grubby undercover cop reportedly drew boos from the opening night audience, though a couple of performances further into the season such obvious dissent was absent.

Charles Edwards has designed the complementary lighting and set; a bleak single setting which conveys an aura of social decay has replaced more traditional attractive multiple settings. Sumptuous period costuming is gone, replaced mostly by drab, dark and disheveled contemporary, apart from Tosca, who arrives in a fashionable rehearsal outfit, then from a performance looking appropriately glamorous.

Brutality, sex and rape are graphic. This, too, is probably not for conventional tastes.

Written at the outset of the 20th century, during the strife-torn early years of the modern unified Italian nation, the program notes point to Tosca mirroring, and connecting with, that turbulent society.

A contemporary reading resonates with Tosca. The brutal secret police, torture and summary injustice have the reek of any authoritarian state, now. Political persecution, too, is nightly news. Glimpses of technology reinforce the contemporary vision, while the decaying physical setting symbolises a society and spirituality in decline.

Though not to all tastes, Christopher Alden’s Tosca, originally produced by Britain’s Opera North in 2002, is a Tosca that speaks to, and of, the contemporary world.