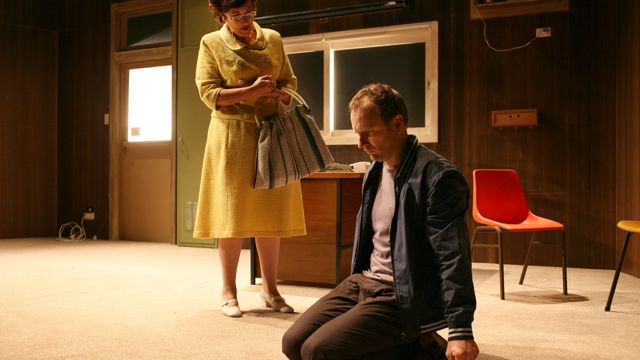 Good drama should stimulate the mind, which this does, and touch the heart, which this doesn’t. Michael Gow’s new play Toy Symphony is a cerebral piece, clever, at times funny, and wildly imaginative. But it does not connect with an audience. Roland Henning is gay. He’s a successful writer, a former cocaine addict who’s kicked the habit, and he’s going through a writer’s block. On the insistence of a friend, he reluctantly begins psychoanalysis. Henning is unique in that ever since childhood, his flights of fancy momentarily manifest in front of him, i.e. Alexander the Great, Joan of Arc, Anton Chekov etc. He only has to think about a person or event, and they immediately spring to life. His teacher believes he’s gifted and encourages him, which results in his writing a play. Unfortunately the play is banned due to the discovery that he has been giving fellatio to the school jock who has been bullying him. There’s lots of intellectualizing about the creative writing process, lots of angst about selling out for the big bucks to TV and film, and a second act return to his drug habit. Gow has peopled the stage with a colorful set of characters, which this ensemble cast bring gloriously to life in a workable set by Jonathon Oxlade. Best of all is Barbara Lowing as a 60s school teacher. Lizzy Falkland and Ed Wrightman do good work in multiple roles, as does Daniel Mulvihill, who is outstanding. Chris Pitman, as the protagonist Henning, is dull. We don’t care at all for him or his problems. His first scene diatribe, which goes on for an eternity, should have brought thunderous applause. It didn’t. Maybe the actor just didn’t have it in him, or else the director let him down. It’s good to see Gow, one of our esteemed playwrights putting pen to paper again after a ten-year hiatus, but next time Michael, give us a bit of heart.